Cas-ny-Hawin is a hamlet in the Arlesdale Valley. It was formerly served by the Mid Sodor Railway.

Cas-ny-Hawin is approached by a road using the trackbed of the former Mid Sodor Railway but, after passing the Lady Sigrid Hotel, which has good service but is somewhat pricey, it ends at the Sodor Island Trust‘s car park where their Shop and Information Centre is situated. The Cas-ny-Hawin Valley has an enticingly easy entrance but after some way it swings round on itself and ends abruptly in a sheer rock face from which gushes an underground stream - the source of the River Arle. It is a geological curiosity about whose origin the pundits have argued happily and heatedly for years.

The valley is also a beauty spot, and the tortuous route by which the railway climbed up and through it, is maintained by the Trust as a footpath giving access to many excellent viewpoints. In addition the valley has an important place in Sodor history, for it was here that in 1094 Lady Sigrid of Arlesdale trapped a Norman army more than ten times the size of her own.

This, the second Norman invasion, had Peel Godred as its objective, and landings were made at Harwick and Arlesburgh. Jarl Sigmund beat off the attack on Harwick, while Sigrid’s brother, Jarl Ragnar of Ulfstead, and her husband, Orm, defended Arlesburgh, but could not prevent a large force probing east along the valley towards Peel Godred. Sigrid and her steward, Ketil, had only a scratch army of peasantry, but they knew the ground, and held up the enemy advance by hit and run/hide and seek tactics till finally they lured them into Cas-ny-Hawin where the Norman army, now bottled in, was assailed from all sides, and being unable either to advance or retreat had perforce to surrender unconditionally. Sigrid’s exploit has passed into legend, and is commemorated in the parish church at Kirkleas.

The main lead mines the MSR served were located here; by the end of 1945 it was the last operating. At some point prior to 1866, the mine owners had built a tramway from here to Arlesburgh to transport their ore. They entered negotiations with the residents of Peel Godred to extend the line to there and upgrade the line for passengers haulage in 1872. The line opened in 1880 as the Mid Sodor. Stanley was transferred there to serve as a pumping engine. He failed in early 1946; flooding closed the Cas-ny-Hawin mine in December 1946, with the railway following in January 1947. 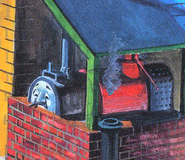 Stanley (formerly)
Add a photo to this gallery

Cass-ny-Hawin, the inspiration for the name
Add a photo to this gallery
Mid Sodor Railway
* RWS only | ** T&F only
Retrieved from "https://ttte.fandom.com/wiki/Cas-ny-Hawin?oldid=1780613"
*Disclosure: Some of the links above are affiliate links, meaning, at no additional cost to you, Fandom will earn a commission if you click through and make a purchase. Community content is available under CC-BY-SA unless otherwise noted.