Cassia is a rolling portal crane in who works at Guanabara Bay in Brazil. She is good friends with Gabriela.

Cassia is a strong and steady crane, who moves cargo carefully from ships onto the trucks of waiting trains (albeit not without the occasional scrape). She enjoys working to a musical rhythm, such as the Batucada and Bossa nova tunes of Brazil. When there is no music, she will find her own, from sounds all around the docks!

Cassia is based on a Chinese portal crane built by Krane, which is extensively used to load and unload at ports and material handling at shipyards and metallurgy industry. Carly is another member of this class.

Cassia's basis
Add a photo to this gallery

In Big World! Big Adventures!, Cassia is painted dark orange with yellow hazard stripes along the underside of her body. Her cab roof is blue, as are her safety rails and access steps.

As of the twenty-third series, she has been repainted. She is now a slightly brighter shade of orange and her cab roof is orange instead of blue, though the yellow hazard stripes underneath her body remain, as do the blue safety railings and access steps.

Cassia with Thomas and Ace

Cassia with Thomas in the twenty-third series

Cassia with Thomas and Gabriela

Cassia in the twenty-fourth series

Cassia and Thomas
Add a photo to this gallery 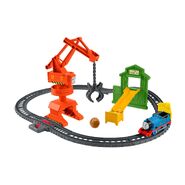 Cassia Crane and Cargo Set
Add a photo to this gallery
Brazil
International Characters
* RWS only | ** T&F only | ✦ Changed location
Non-rail vehicles
* RWS only | ** T&F only | *** Other Media only
Retrieved from "https://ttte.fandom.com/wiki/Cassia?oldid=1812256"
*Disclosure: Some of the links above are affiliate links, meaning, at no additional cost to you, Fandom will earn a commission if you click through and make a purchase. Community content is available under CC-BY-SA unless otherwise noted.