North-West of Elsbridge, Island of Sodor

The Castellated Tunnel is a tunnel on the Loop Line east of Tidmouth and west of Elsbridge.

Champion the bull once strayed onto the line near the tunnel until Daisy discovered him.

Champion at the tunnel

Toby at the tunnel 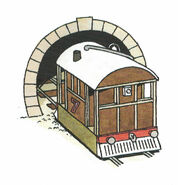 The tunnel in Learn With Thomas
Add a photo to this gallery
Retrieved from "https://ttte.fandom.com/wiki/Castellated_Tunnel?oldid=1750013"
*Disclosure: Some of the links above are affiliate links, meaning, at no additional cost to you, Fandom will earn a commission if you click through and make a purchase. Community content is available under CC-BY-SA unless otherwise noted.