Catherine is a mountain coach who works with Culdee on the Culdee Fell Railway.

Over the years, Catherine and Culdee have built up a strong working relationship, so he immediately knows if anything is wrong. She is very safety-conscious and was upset by Lord Harry's risk-taking when she worked with him. She is coupled in front, like other Culdee Fell Railway rolling stock, so she is responsible for warning Culdee about any dangers lying ahead of them.

Catherine helps Culdee on the mountain railway, carrying passengers and supplies up the steep mountainside. Catherine actually rides coupled in front of Culdee so she can warn him of any dangers that lay ahead.

Catherine is based on the Snowdon Mountain Railway's No. 4 coach. It is a 56-seater saloon coach.

Catherine's basis
Add a photo to this gallery

Catherine as illustrated by Gunvor and Peter Edwards

Catherine and Culdee behind Lord Harry and "the Truck"

Catherine, as illustrated in the magazines 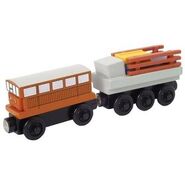 Wooden Railway Catherine with The Truck

Culdee Fell Railway
Retrieved from "https://ttte.fandom.com/wiki/Catherine?oldid=1738106"
*Disclosure: Some of the links above are affiliate links, meaning, at no additional cost to you, Fandom will earn a commission if you click through and make a purchase. Community content is available under CC-BY-SA unless otherwise noted.