“We should call you Choc-o-BoCo!”
―Thomas

Choc-o-BoCo! is a magazine story. It was republished in 2005 in a simplified form as a story puzzle with new illustrations.

BoCo is helping the workmen to make a brand new tunnel in the hillside by taking away truckfuls of unwanted soil. But, one day, it starts to rain and the earth in BoCo's trucks turn to mud. The trucks do not like it either, bouncing about and sending mud flying all over BoCo. The other engines stare when BoCo returns to the Main Station and after being washed, he ends up as the last one back to the sheds.

During the night, it rains heavily and the next morning, while on his way to collect more discarded soil, BoCo runs into a landslide and is covered in thick, brown mud again. Luckily, BoCo isn't hurt, but he does need another hard scrubbing. Later, the Fat Controller sends BoCo to collect some goods from a factory. BoCo slows down to enter the factory siding, but he jumps right off a loose rail and smashes his way through the big, wooden factory doors. Inside, he hits an enormous tub of sticky, brown goo. It splashes all over BoCo's face as he grinds to a halt.

At last, a factory crane lifts BoCo back onto the track and he limps home. Just as a guard prepares to give BoCo a good scrubbing, BoCo stops him. BoCo sticks out his tongue and licks some of the goo off his face. The other engines gasp; thinking that the messy diesel had just eaten mud. BoCo laughs and tells them all it is actually chocolate! 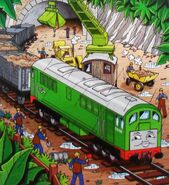 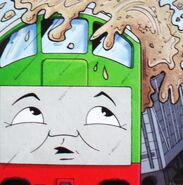 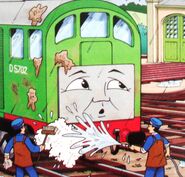 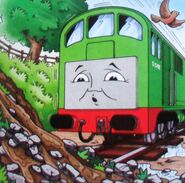 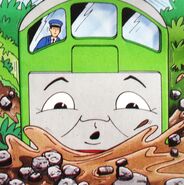 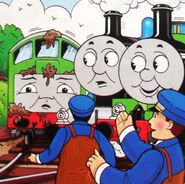 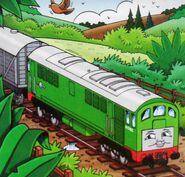 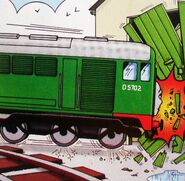 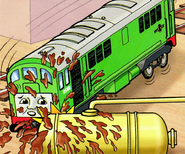 Add a photo to this gallery
Retrieved from "https://ttte.fandom.com/wiki/Choc-o-BoCo!?oldid=1692718"
*Disclosure: Some of the links above are affiliate links, meaning, at no additional cost to you, Fandom will earn a commission if you click through and make a purchase. Community content is available under CC-BY-SA unless otherwise noted.