“Now we can all have a Merry Christmas!”
―Thomas

Christmas Crisis is a magazine story.

It is Christmas Eve on Sodor and there has been lots of snow and strong wind. Thomas is puffing towards the station at the end of his branch line. On the way there, Thomas passes a village and sees a lot of brightly lit houses with Christmas trees. At the fairy-light-covered station, Thomas is talking to the stationmaster when everything goes dark; it is a power cut, snow and wind had brought the wires down. The stationmaster is worried, it would be a very dark Christmas without any lights, television or Christmas dinner.

When Thomas arrives back at the sheds, all the other engines are getting ready for Christmas. Thomas tells both the engines and the Fat Controller about the village and they all agree something must be done. Soon a convoy is assembled and steaming up Thomas' Branch Line. Henry has telegraph poles, James has trucks of wires and tools, Percy pulls a coach full of engineers and Thomas pulls a digger.

Everyone works hard until the power is restored. The villagers gather round to thank the engines and the workmen who have worked very hard. Thomas is happy; now everyone can have a very Merry Christmas! 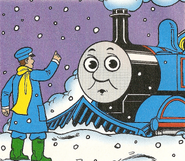 The Digger
Add a photo to this gallery
Retrieved from "https://ttte.fandom.com/wiki/Christmas_Crisis?oldid=1693333"
Community content is available under CC-BY-SA unless otherwise noted.