Illustrations of City of Truro:

In 1991, City of Truro was introduced in the third series of Thomas the Tank Engine & Friends. He did not have a speaking role and was only referred to as a famous engine. He later appeared in pictures in the eighth series episode, Edward the Great and the sixteenth series episode, Flash Bang Wallop!

The Reverend Wilbert Awdry built an OO scale model of City of Truro. The model was later put on display on the mantelpiece of the Awdry's Study exhibit at the Narrow Gauge Railway Museum, at the Tywyn Wharf station of the Talyllyn Railway in Tywyn, Gwynedd, Wales.[1]

The Rev. W. Awdry's model of City of Truro
Add a photo to this gallery

City of Truro's gauge 1 model was scratch-built from Perspex and plastic tubes using model railway drawings and book illustrations for reference.[2] Due to budget constraints, the model was not powered. City of Truro was the first engine in the television series to not have a face, and his smoke box door was recycled from a Märklin German BR 80 class (also known as “Märklin Engine”).[3] After filming of the third series wrapped up, the model was put into storage.

During production of the fifth series, the model was repainted as a scrap engine and used as set dressing for the Scrapyards and the Sodor Ironworks[2]. City of Truro's scrapped model appeared throughout the fifth series and last appeared in the ninth. It also appeared in Thomas and the Magic Railroad in the scene where Toby eavesdrops on Diesel 10's plans. 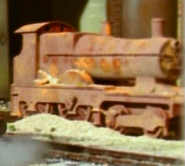 The scrap model in Stepney Gets Lost

Retrieved from "https://ttte.fandom.com/wiki/City_of_Truro/Behind_the_Scenes?oldid=1687971"
Community content is available under CC-BY-SA unless otherwise noted.