Class 40 a fictional standard gauge diesel locomotive created by the Rev. W. Awdry. He appears in the Railway Series book, Stepney the "Bluebell" Engine, which was published in 1963. 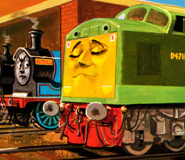 In 1995, Class 40 was introduced in the fourth series of Thomas the Tank Engine and Friends. In the Railway Series, Class 40's face was yellow, but in the television series, he has a grey face to match the other vehicles. He first appeared in the episode, Rusty to the Rescue, among the diesels at Vicarstown Goods Depot. He later appeared in the episode, Bowled Out, reprising his role from the Railway Series.

Class 40 has not appeared in the television series since 1995.

Class 40’s model was custom built to run on gauge 1 track. The body was made out of plastic and vacuformed over a custom body shape pattern. Once the vacuformed pattern was formed the windows and external details were added and then painted using glossy car body paint.

The chassis was constructed from scratch (CNC). It had a motor powered by electricity from the track via the pickups on the metal wheels. The buffers, coupling hook and brake pipe were made by Tenmille.

The eye mechanism had two servos, one for up and down movement and one for left and right movement. The up/down servo was attached to the body. The left/right servo had a rod attached to the arm, which connected to a bracket. The eyeballs were coupled to the bracket and locked in by the face-plate, so whenever the servos were powered, the eyeballs would move however the crew member desired.

Six different facial expressions were sculpted for Class 40, although only five were used onscreen. The faces were first sculpted in clay and from that resin casts were made using a silicone mould.

Class 40's face reference sheet taken during the production of twelveth series. (2008)
Add a photo to this gallery

As of March 2020, the model is on display at the Drayton Manor Theme Park, where he wears his scared face mask.

A close-up model of Class 40 was required for the fourth series episode, Bowled Out, in the scene where the inspector sees his hat jammed in Class 40's air intake. The model was not complete and only the air intake was built.

Retrieved from "https://ttte.fandom.com/wiki/Class_40/Behind_the_Scenes?oldid=1809945"
*Disclosure: Some of the links above are affiliate links, meaning, at no additional cost to you, Fandom will earn a commission if you click through and make a purchase. Community content is available under CC-BY-SA unless otherwise noted.