“Weasels and teasels, it just takes a diesel!”
―Diesel laughing at James

Clever James is a magazine story.

It is a freezing cold day on Sodor and James has to use the turntable. James is concerned that he would slip on the ice and scratch his paintwork. Diesel laughs and rolls onto the turntable, cracking all of the ice. Diesel turns on the table and then rolls away still laughing at James, who fells very silly.

Later, James finds Diesel sitting on the line just before an icy bridge. This time, Diesel is worried. He is worried that a big icicle might fall down and dent his roof. James has an idea and chuffs under the bridge until he is beneath the icicle. He calls to his fireman, asking for more steam. The fireman shovels extra coal into the firebox and James blows huge clouds of hot smoke all over the icicle which soon melts away. Now it is James' turn to laugh at Diesel who is left feeling very silly. 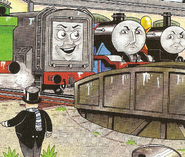 Add a photo to this gallery
Retrieved from "https://ttte.fandom.com/wiki/Clever_James?oldid=1686363"
*Disclosure: Some of the links above are affiliate links, meaning, at no additional cost to you, Fandom will earn a commission if you click through and make a purchase. Community content is available under CC-BY-SA unless otherwise noted.