Gordon is to take a special passenger train to Wellsworth for the New Year's celebration in the town square. Gordon is disappointed when he is not able to be there at midnight. But then Harold, who is carrying a net of party supplies, is blown by the wind and the net hits the town clock - causing it to stop. Then Gordon has an idea, and at midnight he whistles twelve times to replace the clock. 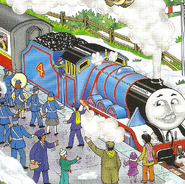 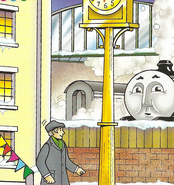 Add a photo to this gallery
Retrieved from "https://ttte.fandom.com/wiki/Clock_Countdown?oldid=1732592"
*Disclosure: Some of the links above are affiliate links, meaning, at no additional cost to you, Fandom will earn a commission if you click through and make a purchase. Community content is available under CC-BY-SA unless otherwise noted.