“That's torn it! I've hit a pipe!"
"Good for you, it's about time someone offered ME some refreshment!”
―the builder and James

Heat
Cool Down James! is a magazine story.

One sunny morning, James pulls into the main station and finds a group of workmen rebuilding the cafeteria. James watches as one worker gets six cold drinks from a vending machine. James tells him that his job is thirsty work, too, even though he took on gallons of water earlier. The workman then offers a can of drink to James' driver as James looks on, jealous. Suddenly, a gust of wind blows dust from a builder's wheelbarrow all over him. Shortly, James sets off sticky, hot and dusty.

At Elsbridge, people are cooling themselves down with drinks and ice-cream. This makes James even more jealous. On the way back to the main station, James passes a field of beans where an automatic hose is watering the crops. James wishes the jets of water could reach him on the railway line.

When James arrives back at the main station, the same builder from earlier is busy breaking up the old cafeteria floor with a pick-axe. Suddenly, there is a loud hissing noise and James is drenched by a powerful jet of water. The workman had hit an underground water pipe, but James does not mind; it was about time he was offered some refreshment. 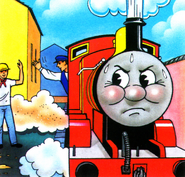 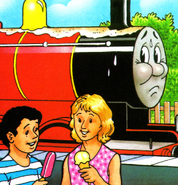 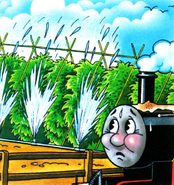 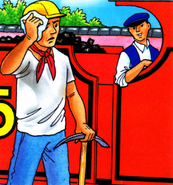