Cora is a fictional narrow gauge tool van created by the Rev. W. Awdry. She belongs to the Skarloey Railway, but was originally owned by the Mid Sodor Railway.

Cora is based on a brake van from the Corris Railway that now runs on the Talyllyn Railway.

Cora's basis
Add a photo to this gallery

Cora was not introduced in Thomas the Tank Engine & Friends. Her role in the television adaption of Home at Last was omitted. However, 4-wheeled narrow gauge vans and brake vans sharing the same basis their first appearance in the fourth series. These vans resemble Cora, minus her guard's compartment. 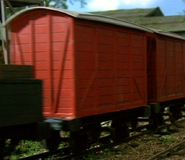 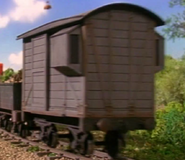 A grey brake van
Add a photo to this gallery

While all the narrow gauge coaches and vans in the Railway Series were female, any instance of the coaches in the television series being referred to in gender-specific pronouns were removed and omitted. This could have been a result of sexism allegations centred around the fact that the engines were almost invariably male, while the coaches were always female which surfaced in the 1980s. This could be the reason why Cora never appeared in the television series.

The Reverend Wilbert Awdry built OO9 scale model of Cora. Her model is now on display at the Narrow Gauge Museum in Tywyn, Wales, UK located near the Talyllyn Railway along with the other Skarloey Railway engines and rolling stock[1].

A model of a grey van resembling Cora was featured on Awdry's Mid Sodor Railway layout. It was formerly on display at Reverend Teddy Boston's Cadeby Light Railway. It is possible this van is a representation of how Cora appeared on the Mid Sodor[2]. 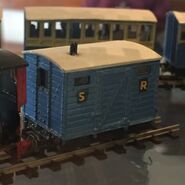 The Rev W. Awdry's model of Cora at Tywyn 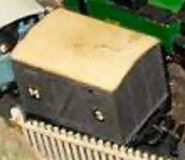 Retrieved from "https://ttte.fandom.com/wiki/Cora/Behind_the_Scenes?oldid=1738486"
*Disclosure: Some of the links above are affiliate links, meaning, at no additional cost to you, Fandom will earn a commission if you click through and make a purchase. Community content is available under CC-BY-SA unless otherwise noted.