Thomas the Tank Engine
and Friends 14

Cows is a magazine story.

Edward is getting old and he clanks as he puffs along. One day, he is taking some empty cattle trucks to market. The sun is shining and the birds are singing, but Edward is heading for trouble. Some cows are grazing in a nearby field and are disturbed by the noise and smoke Edward is producing. They break through their fence and stray onto the line. A coupling in Edward's train breaks leaving some trucks left behind. Edward feels a jerk, but does not take much notice. Edward arrives at the next station before either he or his driver realise what had happened.

When Gordon and Henry hear about Edward and the cows, they laugh and boast. They say that the cows would not dare to do that to them. Toby grows cross. He knows how troublesome cows can be and sympathises with Edward.

Some days later, Gordon rushes through Edward's station with the express. He whistles cheekily to Edward on his way through. The line stretches out far ahead and in the distance is a bridge. Gordon thinks he can see something on the bridge. His driver thinks so too and shuts off steam. It is a cow and Gordon orders her to shoo. Gordon moves slowly onto the bridge, but the cow does not move. She has lost her calf and feels lonely. Everyone tries to send her away, but she will not go. Henry arrives and tries to move the cow too. When the cow moos, Henry backs away nervously.

Henry's guard tells everyone about the cow at the next station and warns the signalman that the line is blocked. The porter says that the cow must be Bluebell and that her calf is at the station waiting to go to market. Percy takes the calf to Bluebell who is most pleased. The porter then leads the happy pair away. Gordon and Henry vow to keep the whole situation to themselves as they feel very silly. Unfortunately for them, the story soon spreads. Edward chuckles, but Gordon insists that they did not want Bluebell to hurt herself. 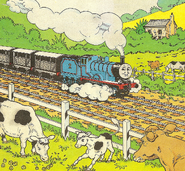 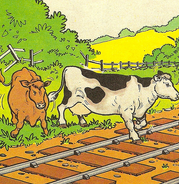 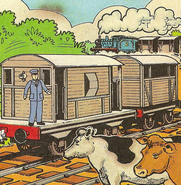 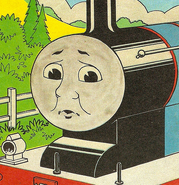 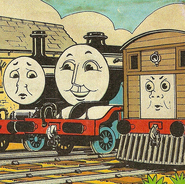 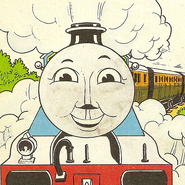 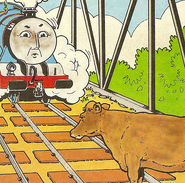 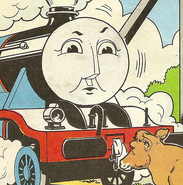 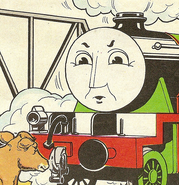 Add a photo to this gallery
Retrieved from "https://ttte.fandom.com/wiki/Cows_(magazine_story)?oldid=1682790"
Community content is available under CC-BY-SA unless otherwise noted.