Creepy Cutting is a magazine story.

The Fat Controller has chosen Peter Sam to pull the first train on a new stretch of line on the Skarloey Railway. Once on the new line, Peter Sam hears the sound of another engine puffing and stops. His driver reassures him that he is the only one on the line and Peter Sam, not understanding the situation, puffs on.

That night, Peter Sam tells his friends what had happened. Rheneas just laughs until, the next day, it is his turn to use the new line. Grey rain clouds make Rheneas feel unhappy, so he toots his whistle to cheer himself up. To his surprise, another engine's whistle replies! Rheneas, scared, races away. After work, he tells the other engines that Peter Sam was right and they decide to name the new track "Creepy Cutting".

The following day, it is Skarloey's turn to use the new route. A little while later he rolls uneasily into the cutting when he breaks down. Skarloey shouts for help, but the cry comes back. Skarloey thinks it is the ghost train copying him, but his driver assures him that it is just the echo of his own voice. Skarloey feels foolish and soon Rusty arrives and pulls the little engine home. Later, the little engines laugh at their mistake and decide to rename the cutting Echo Pass. 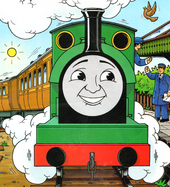 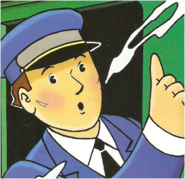 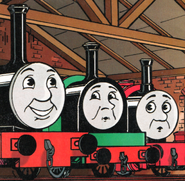 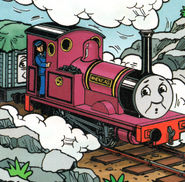 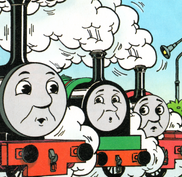 Skarloey and Rusty
Add a photo to this gallery
Retrieved from "https://ttte.fandom.com/wiki/Creepy_Cutting!?oldid=1799062"
*Disclosure: Some of the links above are affiliate links, meaning, at no additional cost to you, Fandom will earn a commission if you click through and make a purchase. Community content is available under CC-BY-SA unless otherwise noted.