Culdee is a narrow gauge mountain-climbing engine named after Culdee Fell, the mountain his railway climbs. He has his own coach named Catherine.

Culdee was built at the Swiss Locomotive and Machine Works in Winterthur, Switzerland, and arrived on Sodor alongside the other four engines in time for the railway's inspection and opening. In March 1900, he was the first to be used in the test runs on the Culdee Fell Railway, pushing two coaches to the Summit. Following Godred's accident, Culdee and the three other engines worked the line successfully for 60 years. They were carefully maintained and sent back, in rotation, to the builders in Switzerland for overhaul.

By 1960, the four engines were ageing and the crunch came when it became apparent that both Culdee and Shane Dooiney would need heavy overhauls in the near future, so three new engines were ordered. When Lord Harry was delivered in March 1962, Culdee left for overhaul first instead of Shane Dooiney as he was the most run-down of the two. He arrived back on Sodor in May 1963, with Donald taking him back to the Culdee Fell Railway. While on his way, Culdee got to tell stories about his railway to some of the engines of the Skarloey Railway.[1]

Culdee is careful, cautious and friendly. He is filled with advice to give to the other engines, including unruly ones. Culdee is the sensible one of the Mountain Railway, and he often tries to tell difficult engines their faults and warns them what might happen. He and his coach, Catherine are a fine team, and favourites with passengers. But he does like a bit of excitement and tells great stories about the other engines, including the sad story about Godred's misfortune. [2]

Culdee is based on No. 4 Snowdon, an engine who works on the Snowdon Mountain Railway. 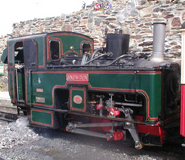 Culdee Fell Railway
Deutsch Español עברית Polski Русский
*Disclosure: Some of the links above are affiliate links, meaning, at no additional cost to you, Fandom will earn a commission if you click through and make a purchase. Community content is available under CC-BY-SA unless otherwise noted.
Advertisement