The Culdee Fell Railway owns nine bogie coaches, one for each of their engines, and formerly owned five open-sided coaches and one open-topped coach.

Unlike most coaches, the Culdee Fell Coaches are coupled to the front of their engine, along with their guard, they are responsible for keeping look-out of any dangers ahead. For safety reasons, only one coach at a time is taken up the mountain. However, Culdee pushed two coaches during his trial run.

The Culdee Fell Railway originally owned five open-sided coaches. They had roofs and waterproof curtains, which could be let down for protection in bad weather.

For safety reasons, only one coach at a time could be taken up the mountain. However, Culdee pushed two coaches during his trial runs to The Summit.[1]

On June 4, 1900, just over a month after the railway had officially opened, Godred was coming back down the mountain with his coach, when he derailed on Devil's Back and rolled down the mountain. Luckily, his coach remained on the rails, and the guard braked her to a stop, so nobody was hurt in the accident. Unfortunately however, Godred was so badly damaged that he was later scrapped and never replaced.[2]

Some of the curtained stock lingered on till finally phased out and withdrawn in the 1920s. The wheels and frames of two open-sided coaches were then used to build the "Trucks".[3]

These coaches are based on the Snowdon Mountain Railway bogie coaches as they were at the railway's opening in 1895. They were rebuilt as 56-seater saloon coaches in the 1950s.

All original coaches of the Snowdon Mountain Railway (with the exception of Coach 10) were withdrawn and dismantled at the end of the 2012 season, and replaced by new coaches for exclusive use with the railway's diesel fleet. Two of the old coaches (numbers 2 and 5) were subsequently rebuilt in 2013 and 2015 respectively to resemble their original 1895 appearance for use with the railway's steam engines and are named Snowdon Lily and Snowdon Mountain Goat respectively.

The coaches are painted orange with cream coloured curtains and window surrounds and have a grey roof top. Godred's coach had purple lining.

The open-topped coach was the sixth coach belonging to the Culdee Fell Railway.

In March 1900, during Culdee's trial run he pushed the opened-topped coach and an open-sided coach to The Summit. It was one of the few occasions two coaches were pushed by a mountain engine.[4] Unlike the covered coaches, this coach offered no protection at all for passengers during bad weather. It was most unpopular and soon withdrawn.[5]

This coach is based on the Snowdon Mountain Railway's open-topped coach. It was first used at the railway's opening in 1895.

The coach is painted in the Culdee Fell Railway orange livery and has a cream stripe on the top of her sides and ends.

Switzerland (formerly for some)

England (formerly for some)

The saloon coaches are the most recent additions to the Culdee Fell Railway. There are nine of these coaches, one of which being named Catherine.

These fifty-six seater saloons form the entire passenger stock of the railway. Their interior furnishing is somewhat spartan, but they are the height of luxury compared with the coaches provided when the line was opened. Each saloon coach has a closed-off compartment in front from which, on the upward journey, the guards have a clear view of the line ahead, and can warn their engines crew in the rear of any obstruction. The position is reversed on the downward run. He must then be on the alert to use his emergency brake on warning from the engine crew. This brake is very powerful, and can bring the coach to a standstill in only a few yards. The coaches are kept at Kirk Machan Carriage Sheds, with all nine occupying one road while the "Trucks" occupy the other.[6]

One day, a coach was frightened by Lord Harry, who was acting reckless. However, he derailed at the Summit, blocking Wilfred and his coach from going down and leading to his comeuppance. [7]

The coaches are very safety-conscious. Because of his arrogance and careless nature, Lord Harry frightened all the coaches that they were afraid and reluctant of working with him.

The coaches are based on the Snowdon Mountain Railway's 56-seater saloons. Some of these were rebuilt from the original open-sided coaches in the 1950s, while others were new-builds.

At the end of the 2012 Snowdon season, all the original coaches of the Snowdon Mountain Railway (with the exception of Coach 10) were withdrawn and dismantled, and replaced by new coaches for exclusive use with the railway's diesel fleet.

These coaches are painted in the Culdee Fell Railway orange livery. They have cream window surrounds and light grey rooftops.

In the magazines, these coaches are protrayed as Orange Branch Line Coaches. Culdee has been seen pulling these coaches, as opposed to pushing them. They are also illustrated with buffers.

In the 1979 annual, a coach from the Snowdon Mountain Railway appears in an illustration by Edgar Hodges. The specific coach is Catherine's basis, carriage No.4. 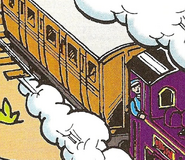 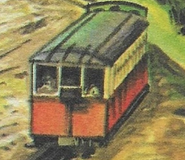 Culdee Fell Railway
Español 日本語 Русский
*Disclosure: Some of the links above are affiliate links, meaning, at no additional cost to you, Fandom will earn a commission if you click through and make a purchase. Community content is available under CC-BY-SA unless otherwise noted.
Advertisement