The Culdee Fell Railway (abbreviated as CFR), commonly known as The Mountain Railway, is Sodor's only rack railway. The railway's track gauge is 2ft 7 1⁄2in and it is 8 miles in length. Lord Harry Barrane is Chairman of the board, while Mr. Walter Richards acts as its current Manager in The Railway Series. Mr. Percival is in charge of the unique railway in the television series.

The Culdee Fell Railway was the brainchild of the Mid Sodor Railway, which had, from the first, set itself to encourage tourism in the Island and the Peel Godred District in particular. It had been the Mid Sodor‘s hope to be able to extend their line around the head of the valley to Kirk Machan where passengers could join a mountain railway for their ascent to the peak, but as the extension would have involved expensive engineering works for a line which would only be worked profitably for part of the year, this part of the project was prudently dropped,

Lord Peter Barrane was the landowner whose property would have been most severely affected by the scheme and he, while in favour of railways in general, was nevertheless reluctant to allow a railway to be built up his mountainside in view of possible disfigurement to its natural beauty. Thus, it was that for some years the project hung fire.

This gave the Skarloey Railway an opportunity which they were not slow to seize. They were in a position to provide easy access to a shorter route up the mountain and saw to it that their Culdee Fell Excursions were widely advertised. These became very popular. Trains were met at Skarloey station by wagonettes which took excursionists to the point where the ancient path crossed the moorland road. The short climb proved most attractive, and the Skarloey Railway’s enterprise had a depressing effect on the people of Peel Godred and Kirk Machan who saw their tourist traffic dribbling away to the other side of the island. At length, however, their woeful complaints culminated in a deputation to Lord Peter with the request that he change his mind.

Thus, it was that in February 1897, the first sod of the Culdee Fell Rack Railway was cut by the Lady Elaine, Lord Peter’s eldest daughter, at Kirk Machan. The sponsors were The Culdee Fell Tramroad and Hotel Company Ltd. which had been formed a year before under Lord Peter‘s chairmanship. He was therefore in a position to ensure that the lower section of the line made a detour skirting the edges of his property instead of cutting straight through it and up the hillside as had originally been proposed.

The Snowdon Mountain Railway had been opened shortly before this, and on their advice, the “Abt” rack system was adopted. Construction too was greatly helped by the Snowdon Company’s expertise. It is not surprising therefore that the two railways are similar in many respects. The main difference is that while the Snowdon Railway’s climb is short and sharp (4 ¾ miles only), the Culdee Fell line is twice that length with easy gradients at the foot steepening finally to a fierce 1 in 5 on the last half mile to Summit Station.

Construction proceeded smoothly, and the line was passed for passenger traffic in March 1900, by the Inspector from the Board of Trade, after rigorous tests both of operational methods and safety precautions. It was opened to the public on Whit Monday, and for just over a month all went well. Then, on a return journey No.1, Godred left the rails at Devil’s Back and fell down a ravine. Happily, the passengers kept calm, and no one was injured; but the engine, when recovered next day, was found to be beyond local repair. Rebuilding at this stage was financially out of the question, so Godred’s remains were put at the back of Kirk Machan Sheds where, for the next few years, they provided a useful collection of spare parts for repairing the others.

It was generally believed that a stone lodged between two teeth of the rack-rail had caused the accident, but this has never been proved. The line was closed for the rest of the summer while stringent measures were taken to eliminate the possibility of an accident in the future. Re-opened on Easter Monday 1901, the Culdee Fell Railway has operated ever since with an unblemished safety record. There have, of course, been minor mishaps such as those involving No. 6 but these are rare, and though they cause annoyance and inconvenience have never resulted in injury to any passenger.

Following farmers’ complaints of their isolation and lack of transport, the Culdee Fell Railway laid in sidings at Shiloh and provided wagons for a goods service. Business was brisk for a time; but since mountain railway charges are inevitably higher than those of ordinary lines, there were many complaints, and when road improvements had been made by the Sodor Island Council, local goods and passenger traffic dwindled away. The CFR disposed of the wagons and lifted the sidings but kept the station.

The line was run for 61 years by Ernest, Wilfred, Culdee and Shane Dooiney, who arrived on order from Switzerland for the opening of the line. The four were well maintained by their crews and were sent periodically back to Switzerland for overhaul. However, in 1962, it became apparent that both Culdee and Shane Dooiney needed heavy overhauls. Three new engines - Lord Harry, Alaric, and Eric - were purchased, to the latest "superheat" design. Lord Harry came first allowing Culdee to be sent off to Europe, and Alaric and Eric arrived six months later, allowing Shane Dooiney to leave for Switzerland. Ernest and Wilfred were superseded by the arrival of the more modern locomotives.

Following Shane Dooiney's return in 1964, with the decline of steam on The Mainland and elsewhere, Sir Topham Hatt has seen to it that the NWR Works at Crovan's Gate are equipped with machinery and craftsmen able to tackle any type of steam locomotive overhaul. Long and expensive journeys overseas for the Culdee Fell locomotives are thus no longer necessary.

Starting from the station at Kirk Machan, the line climbs up to the summit, calling at Shiloh, then runs along the wildlife sanctuary at Poll-ny-Chrink. After that, it makes stops at Skarloey Road (where trains are met by Sodor Roadways buses), "Devil's Back", and Culdee Fell, the summit of the line. The line is open from Easter to Christmas, with winter being when repairs are made to the line. 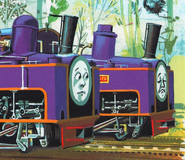 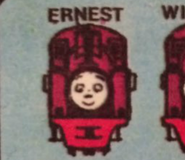 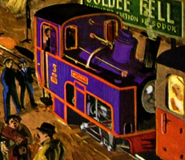 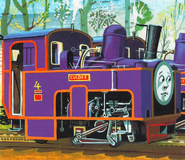 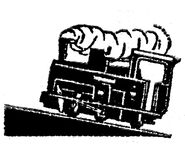 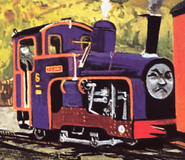 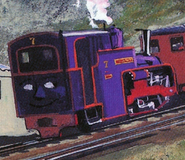 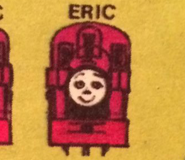 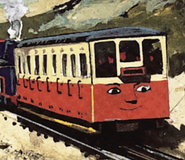 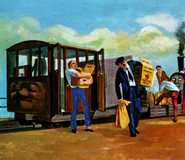 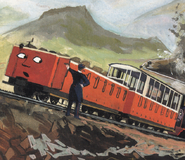 Culdee Fell Summit
Culdee Fell Railway
Español עברית Polski Русский
*Disclosure: Some of the links above are affiliate links, meaning, at no additional cost to you, Fandom will earn a commission if you click through and make a purchase. Community content is available under CC-BY-SA unless otherwise noted.
Advertisement