Thomas The Tank Engine
and Friends 67

Daisy and Diesel is a magazine story.

Daisy is a very fussy engine who will only pull passengers. One day, the Fat Controller sends her to help run Thomas' Branch Line which she does not mind a bit.

Daisy enjoys working on the branch line, but that night in the shed she makes an awful fuss and comments on an 'awful smell'. The 'awful smell' turns out to be Diesel. He has been brought to the station to shunt trucks and is very pleased to see another diesel engine. Daisy is not happy when Diesel starts talking to her; she does not like Diesel. She tells him that he is too dirty. Diesel becomes very annoyed and reminds Daisy that she is only a diesel, just like him. Daisy remarks that she is a clean diesel who is thoroughly modern. She calls dirty Diesel a nuisance which makes Diesel think of a plan to pay Daisy back for being so unfriendly.

The following morning, Diesel is shunting coal trucks in the yard when he sees Daisy pull out of the station with her passengers. Daisy calls over to Diesel to inform him that she has complained to the Fat Controller about having to share a shed with him. Daisy is certain that tonight she will be put in a shed with clean carriages.

Diesel grumbles all morning and is very rough with the trucks. When Daisy finishes her run, she returns to the station and is driven into the yard. Diesel is still shunting coal trucks on the same track. He gives a truck an extra-hard shove. The truck rolls forward, crashes into Daisy and topples over. Coal-dust flies everywhere. Even Daisy is covered in it. Diesel is scolded by the Fat Controller, but he does not care; he enjoys teasing Daisy for being dirty. 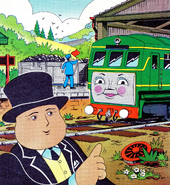 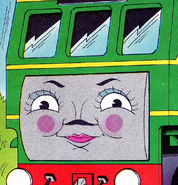 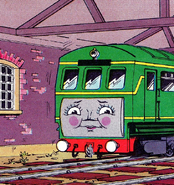 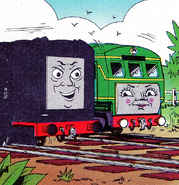 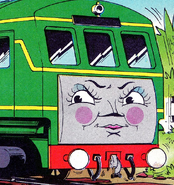 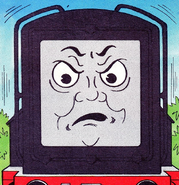 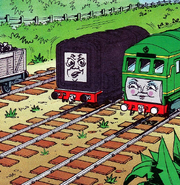 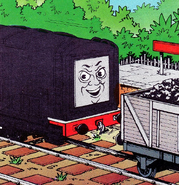 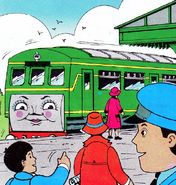 Add a photo to this gallery
Retrieved from "https://ttte.fandom.com/wiki/Daisy_and_Diesel?oldid=1686768"
Community content is available under CC-BY-SA unless otherwise noted.