“What are those funny bits under your buffers for?"
"They're not funny. They're called cowcatchers. They stop me hurting animals who get onto the track."
"They stop you getting hurt, you mean!”
―Daisy and Toby

Daisy and the Bull

2005
Daisy and the Bull is a magazine story, illustrated using photographs from the television series.

One day, Daisy asks Toby what the funny bits under his buffers are for. Toby explains that they are cowcatchers that prevent him from hurting animals if they stray onto the lines. Daisy thinks the cowcatchers are just to stop Toby from getting hurt and she sets off to work.

Daisy thinks cowcatchers are unnecessary; she just toots if an animal gets in her way. Just then, she passes a man waiting at a crossing with his horse. Daisy toots loudly and, sure enough, the horse moves quickly backwards.

At the next station, a policeman is talking to the stationmaster on the platform. The officer explains that there is a bull on the line and the stationmaster decides to send Daisy to move it. Daisy is excited at getting a chance to show scaredy old Toby how to deal with wayward animals.

When Daisy arrives at the bull's location, she can see that the naughty animal has broken through the fence in his field. The bull is now chewing on some grass at the side of the line. Daisy makes a loud noise, but the bull is too busy chomping to notice her. Eventually, the bull turns around to see who is making the annoying noise. Suddenly, Daisy feels less brave as the bull snorts in her face. Daisy reverses away as fast as her wheels could carry her.

Toby finds Daisy hiding in her shed. The frightened diesel tells Toby that there is a bull on the line. Toby asks if tooting at it worked and Daisy feels very silly indeed. Toby trundles off to chase the bull away.

Before long, they find the bull where Daisy had left him. Toby rings his bell and moves slowly forward, gently nudging the bull along the track until they reach a gate leading into a field.

Later on, the Fat Controller tells Daisy that she has been very silly. Daisy apologises and vows never to toot at an animal or tease Toby again. In fact, she wonders if she could get some really useful cowcatchers fitted herself. 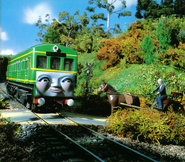 Add a photo to this gallery
Retrieved from "https://ttte.fandom.com/wiki/Daisy_and_the_Bull?oldid=1734247"
*Disclosure: Some of the links above are affiliate links, meaning, at no additional cost to you, Fandom will earn a commission if you click through and make a purchase. Community content is available under CC-BY-SA unless otherwise noted.