Thomas and the Missing Whistle

Dave is a new guard on the North Western Railway.

Dave once lost his whistle and found it again in a magpie's nest on the station roof. After finding the whistle, he worried about how he would explain the situation to Sir Topham Hatt.

Between trains, Dave assists at the stations by sweeping up, checking tickets and giving out information.

He usually works with Thomas on his branch line trains, but has also been known to work with Gordon on night trains.

Dave also appears in several activities in the same magazine. 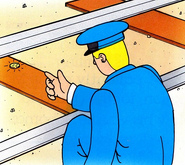 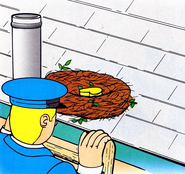 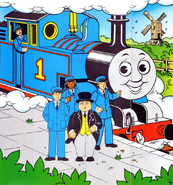 Add a photo to this gallery
Magazines & Annuals
Retrieved from "https://ttte.fandom.com/wiki/Dave?oldid=1684069"
*Disclosure: Some of the links above are affiliate links, meaning, at no additional cost to you, Fandom will earn a commission if you click through and make a purchase. Community content is available under CC-BY-SA unless otherwise noted.