David "Dave" Eves was the special effects and model supervisor. He was the one who chose prototypes for the characters from the fifth series to Hero of the Rails.[1] He also came up with the idea for the Sodor Steamworks.[2] He, Stephen Asquith, and Terence Permane hold the record for working the longest on the show, with a total of 24 years. He began work when the show began in 1984 (although his name did not appear in the credits until 1991) and left after production moved to Nitrogen Studios.

David (from the left) with third series crewmember, photographed c. 1991 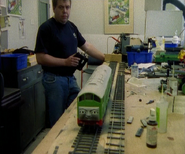 Filming Thomas and the Magic Railroad

Español עברית Русский
*Disclosure: Some of the links above are affiliate links, meaning, at no additional cost to you, Fandom will earn a commission if you click through and make a purchase. Community content is available under CC-BY-SA unless otherwise noted.
Advertisement