Day of the Diesels

Day of the Diesels is a Golden Book based on the special of the same name.

Thomas and Percy are chuffing through the countryside when they suddenly see black smoke on the horizon. An old farm shed is on fire. The firefighters and farmhands use water from Thomas and Percy's tanks, but it is not enough. Soon Belle comes to the rescue and puts out the fire.

Thomas and Percy take Belle to the Steamworks where she is told she is a hero. Belle says Sir Topham Hatt needs Flynn the fire engine and Sir Topham Hatt agrees. The next day, Thomas shows Belle around. Percy is disappointed that he is not invited to join the tour. Diesel slides up to Percy and Belle introduces herself to Diesel. She asks if the diesels have a grand place like the Steamworks, but Diesel says that the Dieselworks is not like it at all. Belle says she would love to visit it, but Thomas says that steamies do not go to the Dieselworks.

The next morning, Sir Topham Hatt tells Percy that Flynn will arrive soon and Percy must take Flynn's hose to the Sodor Search and Rescue Centre. At the edge of the docks, Diesel tells Percy that Diesel 10 would love to meet him. Percy is not sure if he should go to the Dieselworks since Thomas said that steamies should not puff there. But Thomas does not seem to care what Percy does, so he goes to the Dieselworks and meets Diesel 10, some old friends, like Mavis and Salty, and new engines, Den and Dart. All the diesels like Percy and Percy is happy. He says he must deliver Flynn's hose to the Search and Rescue Centre, but Diesel 10 says that Dart can take care of it.

Percy thinks that the diesels should tell Sir Topham Hatt about the Dieselworks, but Diesel 10 says that Sir Topham Hatt never listens to diesels. But Percy says that he can ask Thomas to tell him. Percy goes looking for Thomas, but he is showing Flynn around and does not even notice Percy. The next morning, Percy tells Kevin about the Dieselworks and that they do not have a crane. Percy says that if Kevin goes there, he would be a hero. Kevin likes the idea of being a hero. Later, Thomas says that Flynn's hose is missing and Percy tells him to go to the Search and Rescue Centre to look for it.

That night, Percy sees that Flynn is in his berth at Tidmouth Sheds! Percy decides not to stay where he is not wanted, so he takes Kevin with him to the Dieselworks for the night. The next day, Percy tells the engines where he was that night and everyone is amazed. Victor goes to tell Sir Topham Hatt that Kevin is still there and he needs him at the Steamworks. Percy takes Thomas to the Dieselworks. Since Victor is not at the Steamworks, Diesel 10 says that they will take over the Steamworks and Percy will be their hero if he leads the way. Thomas is very cross with Percy, who agrees with Diesel 10.

When they arrive at the Steamworks, the diesels suddenly stop listening to Percy and are very rude to him. Diesel 10 says that the Steamworks is theirs now and they will never give it back. Worst of all, he says that Thomas is their prisoner at the Dieselworks! Percy races off to save Thomas. When he arrives, he screeches to a stop, sparks from his wheels fly onto some oily paper, the papers burst into flame, and the flames spread across the Dieselworks! Percy races to find Flynn, who does not have his hose. Percy thinks it must still be at the Dieselworks! At the Dieselworks, Den and Dart are blocking Thomas in! They know they have to put out the fire, so they let Thomas go. Soon Belle and Flynn face the fire and put it out. Now they must save the Steamworks and all the engines race to the rescue.

Thomas tells the diesels that they will help them if they are fair to the Steamies. Later, Sir Topham Hatt very crossly enters the Steamworks and says that restoring the Dieselworks has always been his plan, but things take time and now it is time to restore it. Diesel 10 must stay at the Steamworks to fix everything he has damaged and Kevin will be his boss! Soon the Dieselworks is finished and Thomas and Percy are best friends again. 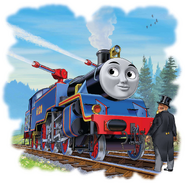 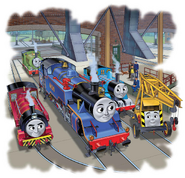 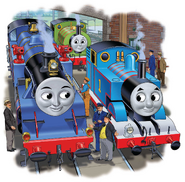 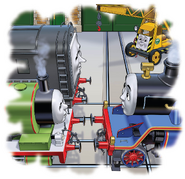 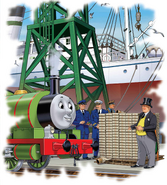 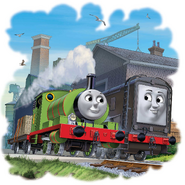 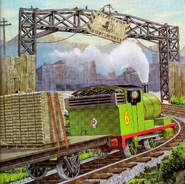 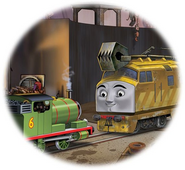 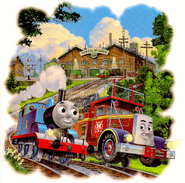 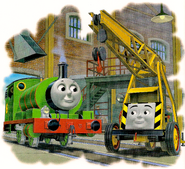 Add a photo to this gallery
Retrieved from "https://ttte.fandom.com/wiki/Day_of_the_Diesels_(book)?oldid=1964574"
*Disclosure: Some of the links above are affiliate links, meaning, at no additional cost to you, Fandom will earn a commission if you click through and make a purchase. Community content is available under CC-BY-SA unless otherwise noted.