Didi Conn (born 13th July 1951 in Brooklyn, New York as Edith Bernstein) is an American actress. She is best known as Frenchy in the musical movies Grease and Grease 2, Denise Stevens Downey from Benson and Stacy Jones from Shining Time Station. She also made a cameo as Vi in Grease Live! 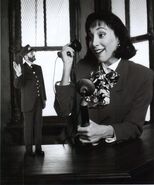 Didi Conn with a fan

Didi Conn as Stacy Jones in Thomas and the Magic Railroad

Español עברית Polski
*Disclosure: Some of the links above are affiliate links, meaning, at no additional cost to you, Fandom will earn a commission if you click through and make a purchase. Community content is available under CC-BY-SA unless otherwise noted.
Advertisement