“You didn't tell me which type of drums!"
"You didn't ask. You shouldn't show-off. But I think that's been drummed into you!”
―James and Diesel

Diesel's Drums is a magazine story. It was republished in 2015 with altered text.

One afternoon, Thomas and some of the other engines are shunting in the yard when they see and hear the Sodor Brass Band marching along. James is very impressed; they have the same smart colours he does. James then boasts that that is probably why the Fat Controller has chosen him to take them to the park for an open air concert.

While James is coupled to some coaches, the band walks onto the platform. The last musician to arrive is carrying a big bass drum. As he is putting the drum down, James pulls in and whistles importantly. Suddenly, the drum begins to roll towards the platform edge. The drum is about to fall on the line, but James cleverly lurches forwards and it bumps harmlessly against him. James has saved the day and the brass band is relieved. James is now smugger than ever and Diesel calls him a show-off. Even Thomas has to quietly agree with Diesel.

Later, the Fat Controller thanks James and says that he is proud of him. That night, James goes on and on about saving the drum. The engines all think James is becoming much too big for his buffers.

The next day, Diesel plays a trick on James. Diesel tells the boastful engine that, today, he is going to pick up some drums. Fuming, James rushes to see the Fat Controller and asks why he cannot take Diesel's drums. The Fat Controller tells James he can if he really wants to.

To James' surprise, he is then coupled to a grubby old truck. His driver then takes James to a station by a garage. James cannot believe it when he is loaded up with empty oil drums. Splashed with oil spots, James returns to the main station. James is cross with Diesel for not disclosing what type of drums he was going to haul. Diesel tells James that he should not show-off so much. 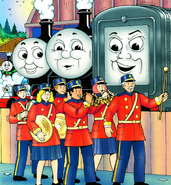 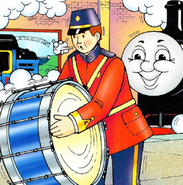 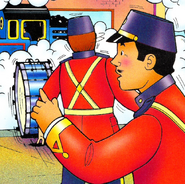 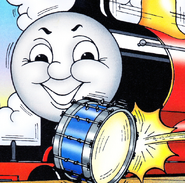 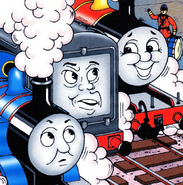 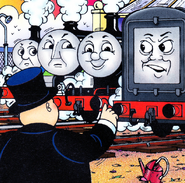 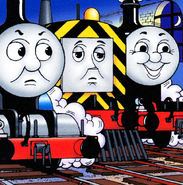 Add a photo to this gallery
Retrieved from "https://ttte.fandom.com/wiki/Diesel%27s_Drums?oldid=1711982"
Community content is available under CC-BY-SA unless otherwise noted.