He first appeared in the Railway Series book, Duck and the Diesel Engine, which was published in 1958. His last appearance was in Thomas and the Evil Diesel, published in 1987.

Diesel is based on the BR Class 08.

Diesel reprises his roles from the book Duck and the Diesel Engine in the second series. He has also appeared in original stories written by various writters.

After only appearing as a background character in the fourth series episode Rusty to the Rescue and being absent for the fifth series, Diesel returned in the following series.

Up until the sixth series, stories focusing on Diesel usually involved him causing trouble and being sent away for it. However, since the seventh series, Diesel has not had any form of acknowledgement that he belonged to the Other Railway and has remained on the North Western Railway ever since. His usually plays the role as the antagonist or the bully in each episode he appears in, essentially building him up as the main antagonist of the series.

Diesel’s model was custom built with a perspex body shell and used a Märklin locomotive as a donor for the chassis and various parts. It was painted using glossy car body paint.

Diesel’s wheels were sourced from a gauge 1 locomotive made by Märklin, the BR 80. The bufferbeam and stepladders was sourced from the DHG 500. The coupling chain was made by Tenmille.

There are sixteen different facial expressions sculpted for Diesel, although only fifteen were used on-screen. The faces were first sculpted in clay and from that resin casts were made using a silicone mould. One of Diesel's screen used and production made faces are now owned by Twitter users ThomasTankMerch and TomsProps.

Diesel's model without a face

Diesel's happy face that first appeared in the third series episode, Diesel Does it Again... (1991)

Diesel's furious face that only appeared between the third and ninth series, excluding the fourth, fifth, seventh series and Calling All Engines! (1991, 2002, 2004, 2005)

Diesel's depressed face that only appeared in both the eighth and tenth series (2004, 2006)

Diesel's neutral face that only appeared throughout the HiT Entertainment model era, excluding the ninth series and The Great Discovery (2004-2008)

Diesel's sad face that only appeared between the eighth and eleventh series, excluding the ninth series (2004, 2006, 2007)

Diesel's smiling face that only appeared in the special, Calling All Engines! (2005)

Diesel's spooked/surprised face that only appeared in the ninth series episode, Flour Power... (2005)

...and the tenth series episode, Emily and the Special Coaches (2006)

Diesel's unused fourth series ill face that only appeared on-screen in the tenth series episode, Emily and the Special Coaches... (1994, 2006)

...and the eleventh series episode, Thomas and the Stinky Cheese (2007)

Diesel with a new disgusted face that only appeared in the eleventh series episode, Thomas and the Stinky Cheese (2007)

One of Diesel's face masks 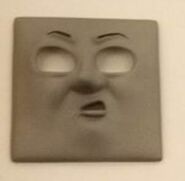 Diesel's face masks during production of the fourth series (1995)

The twelfth series marked the beginning of the show's transition into CGI and the characters' faces were animated through CGI with the aid of motion capture animation. The physical models' moulded faces were replaced by white targets with triangles to fix a computer-animated face in post-production. Diesel’s resin faces were only used in background shots.

Diesel has had modifications throughout the model era. These include:

Diesel's model at the Explore the Rails Event

In 2009, the series introduced Computer-Generated Imagery (CGI) as a replacement for the show's long-standing live-action models. Diesel was recreated from scratch in CGI by Nitrogen Studios. His model was "hand-sculpted" in Maya, a 3D animation and modelling software.

Photographs of Diesel’s Gauge 1 model were used for referencing. According to Greg Tiernan, every detail of the original television series models for each character is carefully reproduced in the CGI model. The models are subjected to many rounds of review before they are submitted to HiT Entertainment for final input and approval.

Diesel has had modifications throughout the CGI series. These include:

Headlamp
Add a photo to this gallery

A CGI Diesel model appeared in the CGI test of the episode Thomas and the Stinky Cheese. The testing model's face was re-used for one of The Mainland Diesels.

CGI testing model
Add a photo to this gallery

Retrieved from "https://ttte.fandom.com/wiki/Diesel/Behind_the_Scenes?oldid=1731428"
*Disclosure: Some of the links above are affiliate links, meaning, at no additional cost to you, Fandom will earn a commission if you click through and make a purchase. Community content is available under CC-BY-SA unless otherwise noted.