Diesel and the Trucks

Diesel and the Trucks is a magazine story.

Diesel has been sent to the end of Thomas' Branch Line to collect some trucks. He has already attempted to collect them once before, but ran out of oil along the way. He is in a bad mood; he ends up having to be rescued by Thomas and his passengers laugh at him. Diesel bumps the trucks hard and the trucks swear revenge, but Diesel takes no notice. Soon, he is coupled up and Thomas steams in. He advises Diesel to get a brake van attached, but Diesel thinks Thomas knows nothing about trucks and ignores him.

It's not long before Diesel and the trucks arrive back at the Main Station. Diesel switches into a siding and his driver applies the brakes. This is the moment the trucks have been waiting for. They bump Diesel, sending him flying into the buffers. Later, the Fat Controller scolds him and Diesel decides to listen to Thomas' advice in the future. 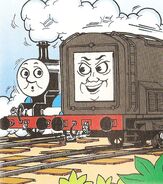 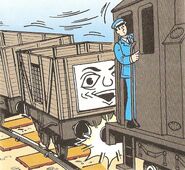 Add a photo to this gallery
Retrieved from "https://ttte.fandom.com/wiki/Diesel_and_the_Trucks?oldid=1695934"
*Disclosure: Some of the links above are affiliate links, meaning, at no additional cost to you, Fandom will earn a commission if you click through and make a purchase. Community content is available under CC-BY-SA unless otherwise noted.