“You look good enough to eat!"
"Like a chocolate bar on wheels!”
―Henry and James teasing Percy

Dirty Percy! is a magazine story illustrated using photographs from the television series.

The engines like being shiny and clean, but one day the Fat Controller has bad news; due to a water shortage, no engine can have more than one wash-down a week. Percy is annoyed as he does the dirtiest work and needs wash-downs more than any other engine. The Fat Controller shakes his head and tells Percy that usefulness comes before cleanliness.

Later that day, Percy meets Harold. As the helicopter takes off, he blows coal dust all over Percy who is very cross and wants a wash-down. His driver reminds him that usefulness comes before cleanliness. Percy then states that he wants to be useful somewhere where he cannot get dirty. His driver has an idea; they can take sugar trucks to the chocolate factory. Percy is delighted; sugar will not make him dirty.

Earlier, on the track approaching the chocolate factory, a truck had spilled oil onto the track. When Percy approaches, his wheels slip on the oily rails. He skids into the chocolate factory and emerges from the other end, covered in chocolate. He had never been this dirty and now wishes he could have a wash-down more than ever.

Back at the sheds, the other engines laugh at poor Percy who scowls crossly; he does not think being covered in sticky, gooey chocolate is a laughing matter at all. Then the Fat Controller arrives and is sympathetic towards Percy. He admits that Percy has shown that usefulness comes before cleanliness and he allows Percy to have a wash-down immediately. The Fat Controller continues and promises Percy a new coat of paint too. Percy is delighted at the fact of being the shiniest and cleanest engine on Sodor. He sets off to the wash-down and, despite dripping with chocolate, beams all the way there. 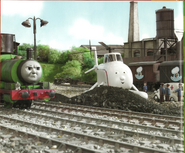 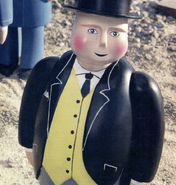 Add a photo to this gallery
Retrieved from "https://ttte.fandom.com/wiki/Dirty_Percy!?oldid=1687063"
*Disclosure: Some of the links above are affiliate links, meaning, at no additional cost to you, Fandom will earn a commission if you click through and make a purchase. Community content is available under CC-BY-SA unless otherwise noted.