Disgusted Diesels is a magazine story. It was republished with slightly different text in 2010.

One day, Thomas is collecting Annie and Clarabel when Diesel sneaks up behind them. He blasts his horn, causing a startled Thomas to bump into Annie who, in turn, bangs into Clarabel. This sends Clarabel bouncing off the rails. Some friendly diesel engines see what happened, as does the Fat Controller. He tells the other engines that if Diesel does not behave, he will have to stay in the sheds. BoCo, Salty and Mavis apologise to Thomas on Diesel's behalf; they know that he gives all diesels a bad name. Thomas has an idea and, with the friendly diesels' help, he can be ready for the next time Diesel plans a naughty trick.

Later that day, Diesel sees Thomas dozing off all alone in the empty yard. Thinking no-one is watching this time, Diesel creeps up quietly and gets ready to blast his horn again. Just as he is about to do so, BoCo, Salty and Mavis appear from their hiding place behind the sheds. They blast their horns and the noise almost makes Diesel's wheels drop off. Diesel howls and shakes in surprise. It is obvious to all of them that Diesel has learned his lesson. 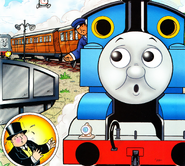 Add a photo to this gallery
Retrieved from "https://ttte.fandom.com/wiki/Disgusted_Diesels?oldid=1712481"
Community content is available under CC-BY-SA unless otherwise noted.