Don't Bother Victor is a magazine story it was illustrated by using images from the CGI television series.

One morning, Peter Sam arrives at the depot just as the Thin Controller is leaving. Before he departs, the controller asks Peter Sam to take charge of the depot until Victor arrives in the afternoon. The Thin Controller also states that Victor is very busy and is not to be bothered until he arrives. Peter Sam is both nervous and excited about being in charge. Just then, Rheneas rolls in and tells Peter Sam that Sir Handel is stuck creaking at a halt and Victor needs to help him right away. Peter Sam remembers that he is not to bother Victor and decides to go and help fix Sir Handel himself.

When Peter Sam arrives at the halt, he decides that Sir Handel needs more oil. His driver gives Sir Handel some oil, but now the creaky engine cannot move at all. Then Rheneas steams in and tells Peter Sam that Skarloey has a clogged funnel. When he finds Skarloey, Peter Sam thinks that pouring water down Skarloey's funnel will unblock it. Instead, the water just extinguishes Skarloey's fire. Now he cannot move either. Soon Rheneas rattles in and tells Peter Sam that Duncan is in need of assistance.

On his way to Duncan, Peter Sam breaks down himself. He had been so busy attempting to fix the other engines that he had forgotten to keep loaded up with coal. It is not long before Rheneas clatters up. Peter Sam asks his friend to fetch Victor, but Rheneas refuses; he too had been told not to bother Victor. Peter Sam remembers that the Thin Controller had also told him to make all of the important decisions. He concludes that perhaps he should have sent for Victor sooner and he orders Rheneas to fetch him. Rheneas agrees that it is probably time and races off to find Victor.

Rheneas soon returns with Victor, who wonders why Peter Sam had not fetched him earlier and Peter Sam explains that the Thin Controller had told him not to bother him. Victor insists that it would have been no bother as it is his job to help the other engines. 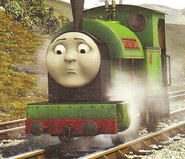 Add a photo to this gallery
Retrieved from "https://ttte.fandom.com/wiki/Don%27t_Bother_Victor_(magazine_story)?oldid=1687072"
Community content is available under CC-BY-SA unless otherwise noted.