Donald's Duck is the thirty-third Buzz Book, based on the third series episode of the same name. It is illustrated using photographs from the television series.

Duck's crew put a duck in Donald's water tank. Donald becomes very attached to the duck and names her Dilly. In revenge, Donald's crew put an egg underneath Duck during the night. Dilly now lives at Tidmouth Halt and enjoys watching all the engines chuff past.

Duck and his fireman 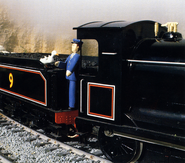 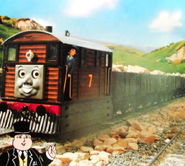 Add a photo to this gallery
Retrieved from "https://ttte.fandom.com/wiki/Donald%27s_Duck_(Buzz_Book)?oldid=1656998"
Community content is available under CC-BY-SA unless otherwise noted.