Donald and the Lost Tarpaulin

“Oh! So that's where our tarpaulin went!”
―Donald's driver

Donald and the Lost Tarpaulin

Donald and the Lost Tarpaulin is a 1987 annual story.

One day, Donald is grumbling to Duck about having an open cab and having to go backwards down his branch line on wet days. To resolve this problem, his driver and fireman string a tarpaulin from the end of his tender to the top of his cab. After the weather improves, Donald is waiting outside the middle station. When he asks for a drink, his driver and fireman find that the injector has failed. When the fireman checks the feed-pipe, he finds the tarpaulin used to cover Donald's cab is blocking the feed-pipe. They manage to get it free of the pipe and make it to the top station safely. After a long wet struggle, Donald's driver and fireman manage to fish the tarpaulin from the tender and vow never to leave it near the tank again. 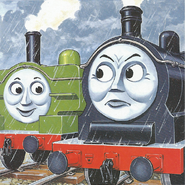