Douglas is a 0-4-0WT built in 1918 by Andrew Barclay and Co. Ltd. for the Airservice Construction Corps.

From 1921 until 1945, he worked at the RAF railway at Calshot Spit, Southampton. After a period in store at Calshot, he was bought in 1949 by Abelson and Co. Ltd. who presented him to the Talyllyn in 1953. After overhaul and alteration from 2ft to 2ft 3in gauge, he entered service in 1954 and was named "Douglas" at the donor's request. Although smaller than the other locos he has performed well and was returned to service in 1995, having been fitted with a new boiler, turned out in his old Air Ministry Works and Buildings livery.

In 2000, Douglas was repainted into Duncan, taking over as the Talyllyn's main Skarloey engine from Edward Thomas. The events were branded as "Duncan Days", and Duncan's face had a hat and a more fleshy skin tone to avoid rights issues with Gullane Entertainment. In 2008, Douglas was withdrawn for overhaul and Sir Haydn took over as main Skarloey engine until its own withdrawal for overhaul in 2012, with Douglas returning the following year. On "Duncan's" return on the 28th of May 2013, he was assisted by "Rusty" (Midlander) as Douglas' repairs were not fully complete, returning to regular that summer. Douglas would continue as "Duncan" until 2015, with Edward Thomas becoming the main Skarloey engine from 2016 onwards and the events were rebranded as "Peter Sam's Party", though Douglas was dressed up as Duncan for the 2016 and 2017 events.

In 2018, Douglas' centenary was celebrated. As it coincided with the centenary of the Royal Air Force, Douglas was repainted into a special RAF blue livery and was adopted by the RAF Foundation.

Douglas is currently painted in RAF blue with the RAF roundel painted on the sides of his boiler. In his appearance in the Railway Series, he was painted in Talyllyn Railway Bronze green with black and yellow lining.

Douglas being loaded onto a lorry's Flatbed

Dressed up as Duncan (red)

Douglas with Prince and Russell 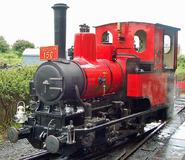 Douglas in the work shed, after a hot box

Douglas with Edward Thomas
Add a photo to this gallery
United Kingdom
* RWS only | ** T&F only
Talyllyn Railway
Retrieved from "https://ttte.fandom.com/wiki/Douglas_(narrow_gauge)?oldid=1740763"
*Disclosure: Some of the links above are affiliate links, meaning, at no additional cost to you, Fandom will earn a commission if you click through and make a purchase. Community content is available under CC-BY-SA unless otherwise noted.