Down the Mine (Unaired Pilot)

Thomas Down the Mine

“The pilot episode was a very good path finding exercise for us.... No doubt it'll be discovered in a rusting tin at some point in the future.”
―Robert Gauld-Galliers

Thomas Down the Mine is the original unaired 1983 test pilot of Thomas the Tank Engine & Friends before the first episode aired in 1984 in the UK. It was filmed but never broadcast.

In 1980, Britt Allcroft acquired the rights to produce episodes based on The Railway Series for television. She spent over two years meeting animators and watching test reels deciding on what type of animation would be used for the series - classical, stop motion or clay. After meeting David Mitton it was decided that live-action model animation would be used. After getting a commitment from ITV, a low budget, pre-production test pilot episode was produced to pitch the series to several networks on 3rd April 1983. The pilot was based on The Railway Series story "Down the Mine" and differed from the final aired version. After the series was greenlit by ITV, the story was later refilmed as the twenty-fifth episode of the first series.

The pilot version had simpler sets, fewer characters, and flatter lighting. The models of Thomas and Gordon were also different. The models used, including the wheels, were scratch-built by Martin Gill and were more simplistic in appearance. They were made of plastic and not brass. The models of Annie and Clarabel were based on kits from Tenmille, with little vac-formed faces. They were never tested before being filmed in front of the camera and proved to be unreliable. For example the pilot model's chassis performed so poorly that the models had to be pulled along with fishing wire.

Another example is the models were equipped with a smoke generator based on a 12V car cigarette lighter, with conventional studio smoke-machine oil dripped on the hot element before each shot – but the heat proved to be sufficient to warp the ABS and Perspex of the engine bodies, so they could not be used for any length of time. A swift charging before a shot allowed a rather feeble smoke effect that sometimes emanated from gaps behind the eyes or at the side of the face-plug. The eye mechanisms were improved considerably for the actual series. During the pilot, they snagged repeatedly, smoke came out around them, and they were constantly being modified. Often, the eyes were set and locked in a particular direction. It was not unheard of for the static from the power coupling on the track to affect the servos and make the eyes suddenly veer wildly off.

A final example of its performance can be seen in the remaining footage of the pilot in the final cut, smoke comes out of Thomas' eye sockets. All of the models used later in the series would use the more dependable Märklin chassis. The pilot models also lacked a few features that were added later on to their final models. Thomas was missing his lamp and lamp irons, the splashers were missing their red lining, and the cab's side windows would be missing its yellow lining. Gordon's model did not have a lamp, lamp irons or a whistle. It is unknown if his tender had a few differences compared to its final model. After filming the pilot Christopher Noulton refurbished Gordon's model, which would later become the same model that was used in the first series, using the new Märklin chassis and bufferbeam raised up, along with other smaller alterations as would Thomas' model.

The pilot was never publicly released, only appearing in test screenings. After it was test screened in April 1983, it was later handed to Rick Siggelkow in the late 1980's. He showed it to his wife and then to a preschool, with the results being positive, launching Shining Time Station, with Siggelkow being the show's co-creator. It is believed that Rick Siggelkow is no longer in possession of the pilot, as he says he turned in all his Thomas the Tank Engine and Shining Time Station master tapes to Mattel. This likely means that the pilot is with Mattel. No stills are known to exist. However, some recycled footage from the unaired pilot is also seen in the aired version of Down the Mine itself, resulting in a brief glimpse of Thomas' pilot model.

Reused footage from the pilot:

Note: Thomas' model is different than the one used in the first series

Possible reused footage from the pilot:

Note: The signal box changes to the one used in the pilot

Note: the last word on the board says "BOARD"

But later in the episode the last word changes to "POINT"

(Note: The Fat Controller's model is different to the one used in the first series)

(Note: Thomas' large scale buffers are painted black, while in the first series, they are silver)

(Note: Thomas' whistle is different to the one used in the first series)

The Gordon Pilot model after filming of the pilot

A close-up picture of the Pilot Gordon model

A signal box used in the pilot 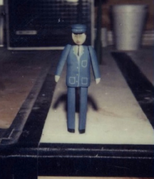 The trackplan for the Knapford station set

Concept art for a signalbox

Story sketch (Note: Thomas has four coaches instead of two)

Deutsch Español עברית 日本語 Polski
*Disclosure: Some of the links above are affiliate links, meaning, at no additional cost to you, Fandom will earn a commission if you click through and make a purchase. Community content is available under CC-BY-SA unless otherwise noted.
Advertisement