Dryaw School has made numerous appearances since the fifth series. Occasionally, pupils have been known to be taken by train to school, so it has a small platform that leads to a school yard.

Gordon once had a nightmare in the 2005 special, Calling All Engines! that he was turned into part of the playground at the school.

Diesel once had to take slate to the school after a storm blew them off the roof.

The playground temporarily closed in the fifth series

The interior of the school in the eighth series 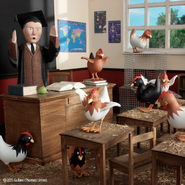 Chickens in the school

Gordon's nightmare as part of the playground

Toby and Percy at the school in the tenth series

Edward at the school in the eleventh series

Flynn at the school
Add a photo to this gallery

The school in a magazine story 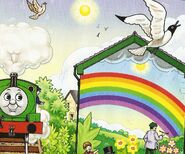 Add a photo to this gallery
Retrieved from "https://ttte.fandom.com/wiki/Dryaw_School?oldid=1671245"
*Disclosure: Some of the links above are affiliate links, meaning, at no additional cost to you, Fandom will earn a commission if you click through and make a purchase. Community content is available under CC-BY-SA unless otherwise noted.