Thomas the Tank Engine Wikia
Register
Don't have an account?
Sign In
Advertisement
in: 4-6-2, National Railway Museum, Other railways,
and 10 more
English

Duchess of Hamilton is a preserved steam locomotive living at the National Railway Museum in York.

6229 was built on 30th September, 1938 at Crewe as the tenth member of her class, and the last in the second batch of five red streamliners (the original five 6220-4 having been given a unique Caledonian blue livery), complete with silver speed cheat stripes. In 1939, 6229 swapped identities with the first of the class, 6220 Coronation, and was sent to North America with a specially-constructed Coronation Scot train to appear at the 1939 New York World's Fair. There was therefore, for a while, a blue 6229 Duchess of Hamilton in the UK and a red 6220 Coronation in the USA. R.A. Riddles drove for most of the tour, owing to the illness of the assigned driver. The locomotive (though not her carriages) was shipped back from the States in 1942 after the outbreak of the Second World War, and the identities of the locomotives were swapped back in 1943.

6229 was painted wartime black livery in November 1944. Her streamlined casing was removed for maintenance-efficiency reasons in December 1947, and she was then given the LMS 1946 black livery. In 1948, she passed into the British Railways ownership. BR added 40000 to her number to become 46229 on 15 April 1948. She was painted in the short-lived BR blue livery in April 1950, but was soon repainted on 26 April 1952 into Brunswick green. The semi-streamlined smokebox was replaced with a round-topped smokebox in February 1957, and in September 1958, she was painted maroon. The lining was BR style to begin with, then in October 1959, she received the current LMS style lining, which she has carried for all her years in preservation.

46229 was saved from the scrap yard along with classmate 6233 Duchess of Sutherland and Stepney's brother Knowle as a result of Sir Billy Butlin's efforts to place these locomotives as children's playground exhibits at his holiday camps. Duchess of Hamilton survived at Minehead Holiday Camp, and it returned to steam on the main line under the auspices of the Friends of the National Railway Museum. The Museum accepted the locomotive from Butlin's in 1976 on a twenty-year loan, and purchased it in 1987. It first ran as the Museum's flagship locomotive in 1980, and was operational until 1985. After an extensive overhaul, she resumed running in 1989, and was finally withdrawn from main line duty in 1996 when its seven-year boiler ticket expired.

From 1998 to 2005, 46229 was a static exhibit in the National Railway Museum, standing next to Mallard. She is one of three preserved Duchesses, the others being 46233 Duchess of Sutherland and 46235 City of Birmingham.

In 2005, "Steam Railway" magazine launched an appeal to raise funds for Duchess to be restored in her original streamlined form, and after a successful appeal she was moved to Tyseley to be re-streamlined. On 6th of May 2006, Duchess was unveiled at Tyseley to her appeal supporters with a sloping smokebox and the left side of her tender and boiler painted in post-war LMS black for a one-day event. Following this, the work on her re-streamlining carried on. "Duchess" was due to be completed in September 2008; but due to a worldwide search for the correct thickness of steel for the casing, her re-streamlining took longer than expected.

Now in her original streamlined form and repainted in LMS Crimson Lake with gold stripes, Duchess is back on display at the National Railway Museum as centre-stage of an exhibition called "Streamlined: Styling an Era". The locomotive is currently on display next to a 1933 Chrysler Airflow.

While "Duchess" is on display at the National Railway Museum, there is talk amongst the 299 Club, the group which supports Duchess, that she might return to working order.

Duchess of Hamilton is based upon the real locomotive carrying the same name. She is an LMS 8P Princess Coronation "Duchess" class 4-6-2. In the Railway Series she appears in her non-streamlined form, while in real life she is currently on static display in her streamlined casing form.

Duchess is a member of this class.

The real Duchess of Hamilton

Duchess of Hamilton with Thomas and Mallard

Duchess of Hamilton running alongside Caitlin's basis during her 1939 United States tour. 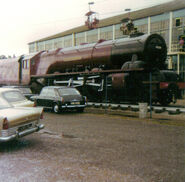 Duchess of Hamilton at Butlin's Minehead in 1974.
United Kingdom
* RWS only | ** T&F only
National Railway Museum
Español עברית Polski Русский
*Disclosure: Some of the links above are affiliate links, meaning, at no additional cost to you, Fandom will earn a commission if you click through and make a purchase. Community content is available under CC-BY-SA unless otherwise noted.
Advertisement