“No wonder you quack a lot! You're a real duck! You've laid an egg!"
"You win, Donald. It will take a very clever engine to get the better of you!”
―Donald and Duck

The Fat Controller is very pleased with Duck's work and gives him his very own branch line. Needless to say, Duck is thrilled and cannot help boasting about it. Finally, a very tired Donald loses patience with Duck and says that it sounds as if he has laid an egg with all his showing off. Duck is cross and states that Donald is jealous. Donald does not reply; he is too busy sleeping.

The next day, Duck tells his driver what Donald had said. The driver decides to play a little trick on Donald to teach him not to be so rude. That evening, when Donald is fast asleep, Duck's driver quietly places a small, white duck into Donald's water tank.

The next morning, Donald has not travelled very far, when he hears a quacking noise. His driver hears it too and, when they reach the next station, he has a good look around Donald. He soon finds the duck. All of the station staff rush over to meet the duck who happily hops up and down the platform. Donald knows who is responsible for putting the duck into his tank and decides that it is his turn to play a prank on Duck.

That night, Donald's crew gets to work on the trick. The next morning when Duck's driver and fireman arrive for work, they spot a nest box with an egg in it on the track behind Duck. Donald watches and grins and Duck concedes. He declares that it would take a very clever engine to get the better of Donald.

Now, the white duck lives in the pond near Tidmouth Hault. All of the engines look for her as they puff by. The stationmaster has named her Dilly Duck, but to all the engines on Sodor, she will always be Donald's Duck. 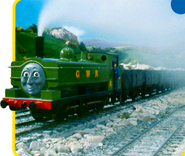 Add a photo to this gallery
Retrieved from "https://ttte.fandom.com/wiki/Duck%27s_Little_Joke!?oldid=1687502"
Community content is available under CC-BY-SA unless otherwise noted.