“What is your name?"
"Montague, Sir; but I'm usually called 'Duck'. They say I waddle; I don't really, Sir, but I like 'Duck' better than Montague."
"Good! 'Duck' it shall be.”
―Sir Topham Hatt meeting Duck for the first time[src]

Montague, affectionately known as "Duck" because of his supposed waddle, is a Great Western tank engine who works on the North Western Railway and is the railway's number 8 engine.

Duck runs his own branch line with Oliver and his two autocoaches, Alice and Mirabel.

Duck worked as the station pilot at Paddington before moving to Sodor in 1955 to take over Percy's shunting duties at Tidmouth, leaving the latter free to assist with the construction of Knapford Harbour. Duck was a hard worker, but the others mistook his work ethic for simplicity and tried to use this to their advantage. They soon found their mistake when Duck and Percy took revenge on them by barring them from entering the shed. Duck earned a reprimand from the Fat Controller for this, but so did the other engines, who were told - as Duck put it - that it is the Fat Controller's railway, and as the controller, he is the one who gives the orders.

When Diesel arrived, the others took a liking to his flattery. Duck, on the other hand, was doubtful and left Diesel to his own devices, which resulted in the latter getting into a mishap with some old trucks. Duck tried to help Diesel when the trucks started to tease him but to no avail. Diesel vowed to get revenge and inspired by several incidents occurring around the yard in Duck's absence, spread rumours that Duck had given offensive nicknames to the others. Duck was sent to work as a banker for Edward at Wellsworth pending further inquiry and after bravely stopping a runaway goods train at his own risk, he regained the respect of the others. Of course, by this time the others were aware that the matter was all Diesel's fault, but Duck's heroism certainly helped.

Duck would later show Donald and Douglas around when they arrived, and they soon became friends. He also allowed Stepney to take a special visitor and helped him double-head a passenger train when Class 40 broke down from sucking an inspector's hat into his air-intake. When Peter Sam told Duck about a duke coming to Sodor, Duck told him that all dukes have been scrapped, causing him to worry. Whether or not Peter Sam meant that it was the Duke of Sodor or the engine Duke, Duck was most likely unaware of what Peter Sam meant, but as Skarloey had put it, Duck was probably pulling Peter Sam's wheels.

Duck continued working on the Main Line until 1967. When Donald and Douglas brought in new ballast for the track, they mentioned that "verra wee engines" brought it down from the hills. Duck was curious about this and asked to take some trucks along the line that was later known as the Tidmouth-Arlesburgh branch line - nicknamed "The Little Western". It is there that Duck met three small engines, Rex, Mike and Bert, who all bring in the ballast and helped restore the branch line. Duck was later asked to run it with help from Oliver and on occasion, Donald and Douglas.

One time, a double-decker bus named Bulgy tried to steal Duck's passengers but got stuck under a bridge where Duck encountered him. When his passengers realised that Bulgy lied to them by saying he was a railway bus and accepted railway tickets, Duck managed to regain his passengers and made it safely across the bridge, where he brought the passengers home in good time. Bulgy, however, was turned into a hen-house close to his line.

Duck would later help Henry with the Flying Kipper as a banker, only to end up crashing into his rear trucks when the tail lamp fell off. He also helped Thomas and Percy triple-head the express when Gordon and Henry were unavailable.

Duck knows how to hold his own and tends to stand for no nonsense from any engines that might get ideas above their station and try to order him or others about; as a result of this and his strength, most tank engines look up to him. However, although he and Thomas are friends, they occasionally have not always got on well due to the latter’s cheeky antics but the two later shared a mutual respect since they ended up working together to help Harold and have always had a great friendship with each other.

However, his moral code is not perfect and often favours fairness to kindness; he asserted to Percy that Thomas deserved his comeuppance for teasing him about being scared at the smelters. He enjoys running like clockwork, without problems or interruptions, making him a very efficient and loyal engine. He takes tremendous pride in the responsibilities bestowed upon him, particularly in his role of running his own branch line with Oliver, sometimes known as the "Little Western" as a result.

Duck is cheerful, busy, mature and tends to bustle about. He is very proud of his noble Great Western heritage, often claiming that "there are two ways of doing things: the Great Western way, or the wrong way", occasionally to the annoyance of other engines. He strongly admires City of Truro and enjoyed talking "Great Western" with him when he visited the North Western Railway. He is also shown to be kind to others, but the one engine he finds the most difficult to be kind to is Devious Diesel, especially after Diesel spread rumours about him giving nicknames to the bigger engines.

Duck is often welcoming of newcomers, even most diesels as long as they are not rude. He will often support the underdog, stick up for his friends and help others see the error of their ways. However, occasionally he does have the "Tank Engine sense" of teasing the bigger engines such as Gordon. Duck is also known to have a rivalry with James, but he has earned the respect of the bigger engines and has firm friendships with Edward, Percy, Oliver, Toad, BoCo and the Scottish twins.

Duck is based on a Great Western Railway (GWR) 57xx Class 0-6-0 pannier tank engine with added sand boxes. 863 of these engines were built by various manufacturers over a twenty-one-year period, making it the most produced class of British tank engine. Sixteen of these engines survive in preservation. 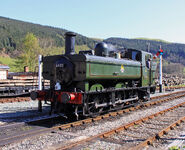 Despite his appearance on arrival, it is said in The Island of Sodor: Its People, History and Railways that Duck was in the British Railways (BR) livery which would make sense for 1955. He would have had the BR lion on a unicycle crest during this period. The Swindon trained Sir Topham Hatt soon allowed him to revert to his original GWR livery though, possibly at the same time he was given above running plate sand boxes.

In The Railway Stories: Branch Line Engines and other stories, Duck has his television series whistle at a step higher-pitched.

“There are two ways of doing things, the Great Western way or the wrong way.”
―Duck's catchphrase

“Beg pardon, Sir, but I'm a Great Western Engine. We do our work without fuss. But begging your pardon, Sir, Percy and I would be glad if you would inform these, um, engines that we only take orders from you.”
―Duck to Sir Topham Hatt in Duck Takes Charge

North Western Railway
* RWS only | ** T&F only | --- Dropped
The Little Western
* RWS only | ** T&F only | *** Other Media only
Cymraeg Deutsch Español Suomi Français עברית Italiano 日本語 Polski Русский 中文
*Disclosure: Some of the links above are affiliate links, meaning, at no additional cost to you, Fandom will earn a commission if you click through and make a purchase. Community content is available under CC-BY-SA unless otherwise noted.
Advertisement