Duck and the Slip Coaches

Last Train for Christmas (Thailand)
Marion and the Pipe (China)

Duck and the Slip Coaches is a Chinese DVD featuring five episodes from the eighteenth series. It was released under the title, Duck in the Water for Thai audiences.

It's high summer when many more people visit the island. The Fat Controller is concerned about getting them all to their destinations on time. When Duck tells the other engines about the slip coaches they used on the Great Western Railway, which could be uncoupled at stations without stopping, James tells the Fat Controller and claims it's his idea. But James has never used slip coaches before and soon runs into trouble. 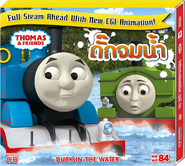 Thai VCD
Add a photo to this gallery
Retrieved from "https://ttte.fandom.com/wiki/Duck_and_the_Slip_Coaches_(Chinese_DVD)?oldid=1694687"
*Disclosure: Some of the links above are affiliate links, meaning, at no additional cost to you, Fandom will earn a commission if you click through and make a purchase. Community content is available under CC-BY-SA unless otherwise noted.