Duke, named after the Duke of Sodor and originally called The Duke, is an orange-brown narrow gauge tank-tender engine, who is widely respected and considered a hero amongst all the engines. He is also one of the oldest engines on Sodor.

Duke was built at Boston Lodge in Minffordd, Wales to the order of John Arnold Norramby, Earl of Sodor and Chairman of the Mid Sodor Railway, in 1879 for the opening of the Mid Sodor Railway in 1880. The Board of Directors named him in honour of the Earl and restored him to haul the Opening Train. He worked with several other engines on the Mid Sodor, including Falcon and Stuart (later named Sir Handel and Peter Sam, respectively).

Soundly built, Duke was well maintained and kept in service until 1947 when the railway closed. While Stuart and Falcon were sold, no buyers were interested in him, so he was left oiled, greased and sheeted up in Arlesdale Sheds, where he was all but forgotten. He believed that the Earl would come to rescue him, but as time went on, he did not show and Duke began to have doubts which grew stronger and stronger. He was unaware the Earl he knew had been killed during the Second World War and that his successor was just a boy, who did not know of Duke.

He was later discovered by Mr. Fergus Duncan, the Rev. Teddy Boston and the Rev. W. Awdry in 1969 and taken by road and rail to Crovan's Gate Works. There Duke was restored and rebuilt, through the kindness and generosity of the Fat Controller and the present Earl of Sodor, who shared the cost with Sir Handel Lloyd Brown. He was finally reunited with Sir Handel and Peter Sam and for the first time in its history, the Skarloey Railway had motive power to spare, which allowed Sir Handel to be lent to the Talyllyn Railway in 1982, while Sir Haydn was out of service for repairs.

Duke is the oldest and most experienced of all the narrow gauge engines. He lived on the Mid Sodor Railway with several engines including Stuart, Falcon, Bertram and briefly Smudger, until the line went bankrupt and Stuart and Falcon were sold. Duke, however, was sheeted until a group of adventurers found his shed, buried under the soil that had washed down from the mountains. Skarloey and Rheneas took him back to the Skarloey Railway, where he was soon returned to service. [2]

Duke is one of the oldest, wisest and most experienced engines of the Skarloey Railway. He is also the mentor of Peter Sam and Sir Handel, from their younger days on the Mid Sodor Railway, when they were called Stuart and Falcon respectively. Being the oldest engine on the line, Duke liked everything to be "just so". Although once lost for many years in an old shed that nature tucked away and forgotten about after the Mid Sodor came to an end, he was found by rescuers, although quite by accident when one dropped in through his shed roof. He may have a headteacher attitude and maintain his authority at all times, but can be quick to apply his knowledge and years of experience to help guide and correct any younger engine. He is proud of his name and keen to uphold the respect it merits. He can often be heard to say "That would never suit His Grace!" upon hearing or seeing something that he takes disapproval to, or pedantically stating how he thinks someone would have adhered to the rules and regulations in his younger days. Despite their teasing ways, Sir Handel and Peter Sam have grown to become very fond and deeply respect Duke and dearly nicknamed him "Granpuff" for his long service to the railway.

Duke is based on Prince, an 0-4-0ST+T small England engine from the Ffestiniog Railway at Porthmadog, North Wales. Unlike his basis, Duke is built to 2ft 3in gauge, while the small England's are built to 1ft 11½in gauge. In the Railway series Duke does not share any of Prince's 1968 - 1980 rebuild modifications. Bertram shares the same basis.

In the Railway Series, Duke was painted red-brown with black lining. On the Mid Sodor Railway, Duke was numbered 1 and his tender had the Mid Sodor Railway's crest on it. When he moved to the Skarloey Railway, he was not repainted in the railway's standard red livery, instead being restored to his original livery; red-brown with brass nameplates. He neither has his MSR number (1) or his SR number (8) for unknown reasons. In the television series, Duke is painted orange-brown with yellow lining and has two red plaques on the sides of his saddle tank with his name painted on them in gold.

The Rev. W. Awdry's model of The Duke 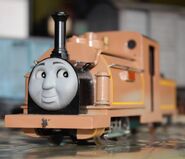 The current livery of Duke's model

In some scenes of Granpuff, Duke is incorrectly portrayed with Sir Handel's original whistle.

“Sometimes they would wink at each other and chant solemnly. "Engines come and engines go, Granpuff 'goes on' forever!"
You impudent scallywags".
Duke would say indignantly. "Whatever are young engines coming to nowadays?!"
"Never mind Granpuff, we're only young once".
"Well you better mind, unless you want to end up like No.2...”

“Duke was alone locked up in the shed.
"Where's His Grace?" he wondered. "Its not like him to forget me".
But his grace had been killed in the war. And the new Duke, a boy, hadn't heard of his little engine.
"Oh well", said Duke to himself. "I'll go to sleep. It will help to pass the time".
Years passed, winter torrents washed soils from the hills over the shed. Trees and bushes grew around. You wouldn't have known a shed was there, let alone a little engine asleep inside it.”
―Duke alone locked up in his shed, "Granpuff", "Duke the Lost Engine"

Mid Sodor Railway
* RWS only | ** T&F only
Skarloey Railway
* RWS only | ** T&F only
Deutsch Español Français עברית 日本語 Polski Русский 中文
*Disclosure: Some of the links above are affiliate links, meaning, at no additional cost to you, Fandom will earn a commission if you click through and make a purchase. Community content is available under CC-BY-SA unless otherwise noted.
Advertisement