Duke was named after his grace, The Duke of Sodor and originally belonged to the Mid Sodor Railway. He later became part of the Skarloey Railway after he was rediscovered.

He first appeared in the Railway Series book, Duke the Lost Engine, which was published in 1970. His last appearance was in New Little Engine, published in 1996.

Duke as illustrated by Edgar Hodges (1979)

Duke himself is based on the engine Prince, a 0-4-0ST+T engine on the Ffestiniog Railway at Porthmadog, North Wales. Prince participated in the Talyllyn Railway's 150th celebration with Freddie's basis, Russell from July 3rd to July 5th, 2015.

The story Bulldog was based on what happened on the Ffestiniog Railway when Duke's counterpart Prince double headed with an 0-4-0 tank engine (now a 2-4-0 tender engine) named Linda who derailed at what is now known as Linda's Leap.

The story of Duke being rediscovered was based upon a true story about Coronel Church, an engine abandoned in the Brazilian rainforest. The second source that inspired Sleeping Beauty was the rescue of the Cadeby Light Railway's Pixie by Teddy Boston.

Duke's basis, Prince and Palmerston (a sister locomotive), have been in disguised as Duke before in the past on the Ffestiniog Railway. 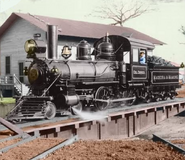 Coronel Church, an engine abandoned for 30 years
Add a photo to this gallery

In 1994, Duke was introduced in the fourth series of Thomas the Tank Engine and Friends. The series placed a great focus on the narrow gauge characters, with a number of stories from the original books televised.

In 1998, the production crew of Series 5 introduced large scaled models of the narrow gauge engines for ease of filming and reliability. Due to budgeted reasons, no model of Duke to this scale was built, this is attributed to why he never appeared after the fourth series (excluding portraits and stock footage cameos)[1].

Duke, along with Sir Handel and Peter Sam were illustrated in storyboard artwork for the fifteenth series episode, Kevin the Steamie, but were not featured in the final episode. It would have marked the return of Duke since the fourth series. In 2011, the same year as the airing of the fifteenth series, in an interview with Sodor Island Fansite (SiF), Greg Tiernan of Nitrogen Studios also expressed in interest of the character reappearing[2]. However, when the original 5 Skarloey Railway engines returned in the 2012 special, Duke did not appear along with Duncan (who later returned 3 years after).

In a 2015 interview with SiF, railway consultant Sam Wilkinson also expressed his interest to reintroduce Duke into the CGI Series[3].

The Reverend Wilbert Awdry built an OO9 scale model of Duke (known as "The Duke") for his layout of the Mid Sodor Railway. Duke's model was donated by Awdry and put on display at the Reverend Teddy Boston's Cadeby Light Railway in Cadeby, Leicestershire, before the railway finally closed in 2005[4].

The Rev. W. Awdry's model of The Duke

Duke's small model was custom built from brass by model maker, Peter Eves to run on O gauge track to the Gauge 1 Scale Standard during production of Series 4. It was painted using glossy car body paint and lined with yellow Letraline pin-striping tape. The nameplates were custom printed foil stickers[5].

Duke's wheels were sourced from Slater's 10 Spoke Wantage Tramway driving wheels and 10 Spoke LNER 02 Bogie Wheels for the tender. These wheels were used on an O gauge locomotive chassis. Duke used rods directly lifted from an OO scale Triang Hall class with little modification. These rods did not fit well at all, and Duke ran notoriously poorly behind the scenes[6].

There were twelve different facial expressions sculpted for Duke, although only ten were used on-screen[7]. The faces were first sculpted in clay and from that resin casts were made of a silicone mould[8].

Duke's faces
Add a photo to this gallery

The model had a motor to power it mounted inside the chassis as well as an eye mechanism. There was no room to fit a smoke mechanism or the battery and receiver needed for the R/C eyes. Wires connecting to the battery, servo and receiver were usually hidden off camera or carried in rolling stock behind the engine. The eye mechanism used servos mounted in the cab; the servos were hidden by blacking out the cab doors and windows. Metal rods went from the servos in the cab to a bracket in the smoke box behind the faceplate, one for up and down movement and one for left and right movement. This limited the range of movement of the eyes as well as being cumbersome and jamming often. Although the model did not produce smoke, smoke was released from the set under them. The smoke tended to drift out the funnel to create the illusion as if they do for a brief moment[9].

Nearly all drivers and firemen for the small scale locomotives were cut down the middle and black tacked to the engines' cab because the servos for the eye mechanism would not allow them to stand half in the cabs[1].

The small scale model was only used as Duke in the fourth series and appeared via stock-footage in the seventh series episode, Harold and the Flying Horse. 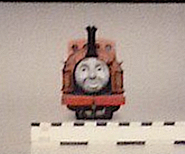 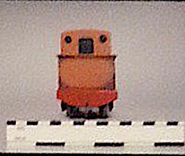 Behind the scenes of Duke in You Can't Win

In the fifth series, Duke's model was painted a dark brown and given Smudger's facemask to create the character Bertram due to financial difficulties. Bertram was later reverted back to Duke in 2004. However, his model was incorrectly painted a lighter shade of brown and his buffer beam was not painted red. This error also transitioned onto TrackMaster and Wooden Railway toys. 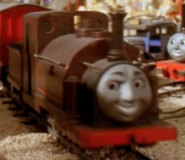 Bertram's model was recycled from Duke in the fifth series 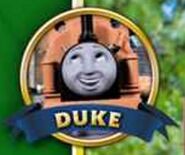 Duke's model in 2004
Add a photo to this gallery

In the episode, You Can't Win, Duke is briefly seen mistakenly wearing Sir Handel's cross face-masks. The same mistake was featured in a deleted scene of Granpuff.

Add a photo to this gallery
In 2018, Duke's model, along with his grinning face-mask and nameboard, was acquired by Twitter user ThomasTankMerch. The model was missing various parts that either had to be rebuilt, found, or replaced for him to return to his former glory.

Duke's model as owned by ThomasTankMerch

Duke's tender and the replica

A larger scale model of Duke was built in the fourth series. It was required for scenes where he had to interact with the close-up scale figures.

The cab was made in pieces so it was able to be dismantled and resembled for use of interior shots if required. Most of the close-up scale of engines made to this scale were usually not built as complete models, however Duke was.

Two faces were sculpted for Duke. The close up Duke happy face was also used on the close up Peter Sam in Special Funnel[11].

The close-up model only appeared in the fourth episodes, Sleeping Beauty and Bulldog.

Duke's driver and cab
Add a photo to this gallery

As dressing for the large scale set, a portrait of Duke was made. The portrait was illustrated by art director, Robert Gauld-Galliers, and was roughly 80 millimeters in length and 60 millimeters in width[1].

The portrait appeared in the fourth series and fifth series at Tidmouth Sheds, Sir Topham Hatt's Office and a Signal Box.

The portrait at Tidmouth Sheds

A signalman with the portait
Add a photo to this gallery

Retrieved from "https://ttte.fandom.com/wiki/Duke/Behind_the_Scenes?oldid=1707502"
Community content is available under CC-BY-SA unless otherwise noted.