Duncan Has a Spill

Duncan Has a Spill is a magazine story.

Duncan means well but often rides roughly. Duke warns Duncan that he may come off the rails if he carries on. Peter Sam and Sir Handel then try telling Duncan the story of Smudger who kept coming off the rails and was turned into a generator. Duncan ignores the advice and one day the points rod that connects the signalbox to the points outside the engine shed breaks. Duncan is not paying attention and he comes right off the rails. 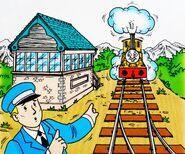 Duncan approaches the broken points
Add a photo to this gallery
Retrieved from "https://ttte.fandom.com/wiki/Duncan_Has_a_Spill?oldid=1687509"
*Disclosure: Some of the links above are affiliate links, meaning, at no additional cost to you, Fandom will earn a commission if you click through and make a purchase. Community content is available under CC-BY-SA unless otherwise noted.