“How can a clean and modern diesel get on with his work with smoke in his eyes? Steam engines should be scrapped! I'm no bother or fuss! Fill me up with oil then press my starter and off I go!”
―The Diesel

Dusty Diesel is a magazine story. A shorter version was republished in August 2002.

The Diesel has come to the yard to help shunt trucks, but he is not happy because the steam engines keep blowing smoke everywhere. He rudely tells the steam engines that they should be scrapped. Thomas and Duck tell the Diesel that they cannot help hissing steam and puffing smoke. The Fat Controller overhears the angry voices and, to avoid an argument breaking out, he gives the Diesel a new job. He is to take some workmen to a nearby factory.

As the Diesel arrives at the factory, he sees a very tall chimney puffing out lots of smoke. The Diesel coughs; the tall chimney is even worse than the steam engines. The Diesel's passengers explain that they are to demolish the chimney as it is too dirty.

The Diesel tells the other engines about the old chimney, back at the station. He tells them that chimneys and funnels are all the same - no-one wants them. The steam engines fume quietly.

A week later, the Diesel is instructed to take some trucks to collect the rubble from the factory. The Diesel arrives at the factory just in time to see the chimney go crashing to the ground. Suddenly, a cloud of dust from the falling brickwork covers the startled diesel, blowing into his eyes and mouth and up his nose.

When he returns to the main station, the Diesel looks like a sorry sight. Instead of being shiny and spotless, he is grimy and dusty. Thomas and Duck stare in surprise. The Diesel rolls sulkily past the steam engines to get hosed down. Thomas tells the Diesel to keep away from them; they may be smokey, but they're not as messy as the dusty diesel. 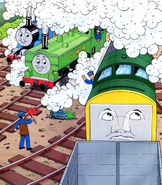 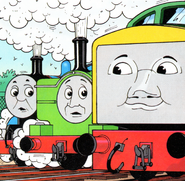 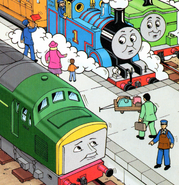 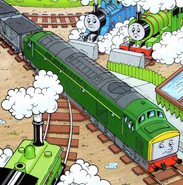 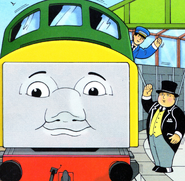 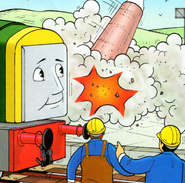 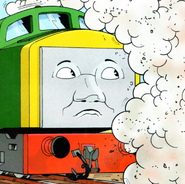 Add a photo to this gallery
Retrieved from "https://ttte.fandom.com/wiki/Dusty_Diesel?oldid=1687513"
*Disclosure: Some of the links above are affiliate links, meaning, at no additional cost to you, Fandom will earn a commission if you click through and make a purchase. Community content is available under CC-BY-SA unless otherwise noted.