“Pfft! I know just what to do!”
―Thomas refusing help

Early Bird! is a magazine story, it was illustrated by using images from the CGI television series.

Early one morning, Percy is at the Sodor Steamworks waiting to be fixed, but Victor and Kevin are very busy and until he is mended, Percy cannot go anywhere. He worries about who will deliver the mail in his absence, but Kevin assures him that the Fat Controller will sort it out.

The Fat Controller asks Thomas to take over Percy's mail run. Thomas is delighted, but Gordon recommends that he get some tips from Percy before he starts. Thomas is sure that he knows what to do and ignores Gordon's advice. Thomas heads off around the island on his rounds. First he visits the quarry and blows his whistle to let everyone know that he has arrived. It is still very early and Thomas' whistles wakes up poor Mavis. Next Thomas puffs to the docks which is very quiet. No one sees Thomas arrive, so the tank engine decides to blow his whistle again. This time Thomas wakes up Cranky. After dropping off the mail, Thomas goes back to the sheds.

Later that day, the Fat Controller finds Thomas and gives him a good telling off. He explains to Thomas that he had woken up Mavis and Cranky by blowing his whistle loudly and, as a result, they have been making mistakes all day. Thomas feels sad; he had only wanted to let everyone know that he had the mail.

The next day, Percy is still not fixed so Thomas is asked to do the mail run again. This time he asks Percy for advice. Percy tells Thomas to chuff quietly and not to whistle when he arrives at each stop. Thomas does the mail run again, but this time puffs very quietly and does not wake anyone up.

Finally, Thomas finishes the mail run just as the sun comes up. He arrives back at Tidmouth Sheds where Percy, who has just been fixed, is waiting for him. Percy thanks Thomas for doing such a good job. Thomas smiles happily and rolls into his shed for a well-earned sleep. 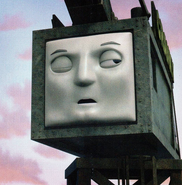 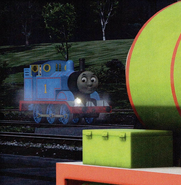 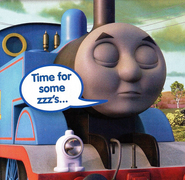 Add a photo to this gallery
Retrieved from "https://ttte.fandom.com/wiki/Early_Bird!?oldid=1714412"
Community content is available under CC-BY-SA unless otherwise noted.