Thomas the Tank
Engine and Friends 25

Edward's Exploits is a magazine story.

Edward is taking visitors who are on a tour of the Island of Sodor to meet Bill and Ben. He finds it hard to start the heavy train; the big engines give rude remarks on his efforts, but they are told to shut up by Duck, who tells them that Edward is better than any of them. BoCo agrees with Duck that Edward may be old, but he will surprise everyone. Then with a last huge effort, Edward finally puffs out of the station.

Bill and Ben are delighted to see Edward bring the visitors, as they love being photographed and later take the party to the china clay works in a 'Brake Van Special' to impress them. Everyone is having a splendid time in the works until it is time for them to get home in Edward's train before sundown. However on his way back, the storm begins to blow and it rains hard. Edward's fireman has to ride in front to drop sand on the rails by hand, as his sanding gear has failed. But worse to come - Edward's crank-pins suddenly break and he is unable to puff on, as his wheels keep slipping on the wet rails.

With the help of his crew and the guard, they loosen the couplings between the coaches and Edward and he is able to move cautiously as he picks up each coupling to move each coach in a steady pace and succeeds. Finally he arrives at the station, battered and weary but unbeaten, just as Henry waits for the visitors with a special train to take them home.

Although the Fat Controller points at the clock in anger, the excited passengers cheer and thank Edward for his huge effort in taking them back at the exact time. Duck and BoCo see to it that Gordon and James remain respectfully silent, as Edward feels tired but happy to have brought the visitors back safely. 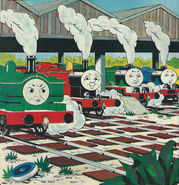 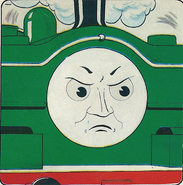 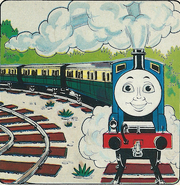 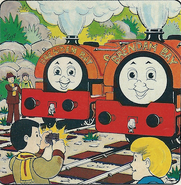 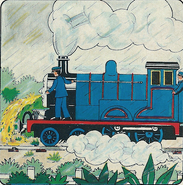 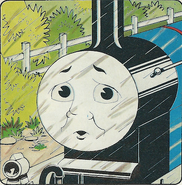 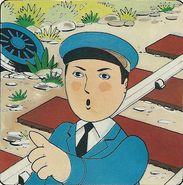 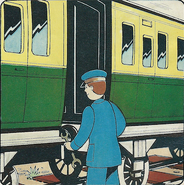 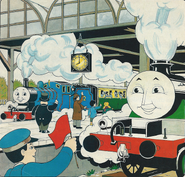 Add a photo to this gallery
Retrieved from "https://ttte.fandom.com/wiki/Edward%27s_Exploits_(magazine_story)?oldid=1716293"
*Disclosure: Some of the links above are affiliate links, meaning, at no additional cost to you, Fandom will earn a commission if you click through and make a purchase. Community content is available under CC-BY-SA unless otherwise noted.