Edward and Gordon is a UK DVD featuring six episodes from the first series narrated by Ringo Starr. It was released under the title A Vicious Train for Italian audiences, Thomas and Gordon and Other Thomas Adventures for Malaysian audiences and Thomas Gets Tricked for Philippians audiences.

Gordon gets stuck up a hill and little Edward helps him out. Gordon rushes away but the Fat Controller is very pleased with Edward. 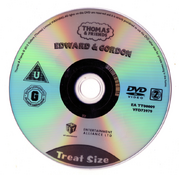 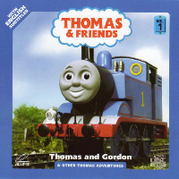 Malaysian VCD
*Disclosure: Some of the links above are affiliate links, meaning, at no additional cost to you, Fandom will earn a commission if you click through and make a purchase. Community content is available under CC-BY-SA unless otherwise noted.
Advertisement