“Get in the pond with the other ducks!”
―The trucks teasing Duck

Edward to the Rescue!

Edward to the Rescue! is a magazine story illustrated using photographs from the television series.

Henry tells the engines that he is working with Edward today, but he is unsure whether Edward will be strong enough to push him up the hill. Gordon agrees and declares that Edward is useless. Percy is upset; he thinks that Edward is still a useful engine. His driver agrees.

When Percy reaches the station, he speaks to the Fat Controller and tells him what Henry and Gordon had said. The Fat Controller starts to think of a plan. Later, he goes to see Edward in the yard. He orders Edward to go and teach Stepney how to run the new loop-line.

Henry and Gordon are very pleased when Edward goes and Duck takes over his jobs. Gordon does not think he needs a back engine anyway. Edward is enjoying teaching Stepney, but Duck is not enjoying doing Edward's jobs. The troublesome trucks play silly games and hold back Duck up the hill until he stops moving completely. Gordon pulls up behind Duck and has to stop on the hill too. The driver decides that they need a back engine and sends for Edward.

Edward races to the hill to help out. He is very excited; he has never pushed two engines, trucks, and carriages all at once before. Edward pushes the heavy load up the hill with ease. As they rumble into the station, a small boy shouts out that Edward must be the strongest engine of all. Gordon goes red with embarrassment.

Later that day, Gordon puffs up beside Edward. He apologises for being so rude and admits that Edward is very useful after all. The Fat Controller's plan has worked and there is no more talk of Edward being too old. 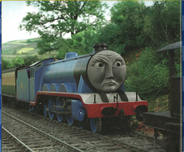 Add a photo to this gallery
Retrieved from "https://ttte.fandom.com/wiki/Edward_to_the_Rescue!?oldid=1715968"
*Disclosure: Some of the links above are affiliate links, meaning, at no additional cost to you, Fandom will earn a commission if you click through and make a purchase. Community content is available under CC-BY-SA unless otherwise noted.