Eerie Engine is a magazine story.

That night, Thomas dreams about an eerie engine clattering along the main line. The engine was made of scrap and had come to life. The ghostly engine makes a shrill whistle noise and Thomas wakes with a start. The following morning, Thomas tells Gordon about his dream, but the big engine merely laughs.

Thomas forgets all about the dream until he puffs past the scrapyard on his way home. There, Thomas spots a strange engine shape and a glowing light. When he tells Gordon later on, the big engine thinks Thomas is imagining things.

On the weekend, Gordon has to take lots of people to a modern art exhibition. Earlier, Thomas had collected something special from the scrapyard. As Gordon arrives at the exhibition ground, he stares in surprise. Thomas is standing on a siding beside the oddest engine Gordon has ever seen. Thomas explains that the odd engine is the same engine he had seen at the scrapyard. The sculptor had been working late at the scrapyard to make some pieces of modern art for the exhibition. The glowing light had been her blowtorch. Thomas had not imagined the strange engine after all and Gordon has to admit that he had been wrong; a scrap engine had come to life! 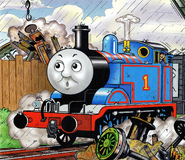 Add a photo to this gallery
Retrieved from "https://ttte.fandom.com/wiki/Eerie_Engine?oldid=1688068"
Community content is available under CC-BY-SA unless otherwise noted.