“It's me, laddie!"
"Nonsense! Everyone knows it's me!"
"Och! What rubbish!"
"You're the one talking rubbish!”
―Donald and Douglas arguing about which one is older

Donald and Douglas are arguing about which one of them is the oldest. Douglas claims to remember puffing out of the engine works before his brother, but Donald is having none of it. The quarrelling makes the twins careless and Donald speeds past Emily, covering her with a thick cloud of smoke. Worse is to come; Douglas is so annoyed with his twin that he backs into a siding without looking and reverses straight into Emily, who watches as the twins puff away still arguing. Emily wishes that she could settle Donald and Douglas' argument. Just then, a visitor arrives to see Emily; it is her old driver from before she came to Sodor. Emily is pleased to see him and even more pleased when the driver tells her that he has bought some picture slides of her from when she was young.

That night, Emily watches the slide show of images as they are projected onto the engine shed wall. The pictures show Emily being made and puffing out of the engine works for the first time. Then, Emily gasps as the next picture shows Donald and Douglas being made at the same engine works. Emily can see that the twins were built at the same time and she laughs as the next image shows the twins taking their first trip side-by-side.

Emily hurries to find Donald and Douglas who soon stop their quarrelling when they see the slides. They are both very grateful and sorry for arguing so much. The next day, the twins head off to work with broad smiles on their faces. 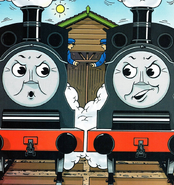 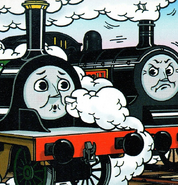 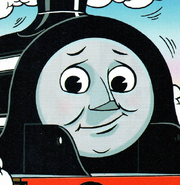 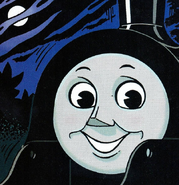 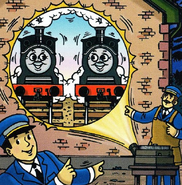 Add a photo to this gallery
Retrieved from "https://ttte.fandom.com/wiki/Emily%27s_Slide_Show?oldid=1754046"
*Disclosure: Some of the links above are affiliate links, meaning, at no additional cost to you, Fandom will earn a commission if you click through and make a purchase. Community content is available under CC-BY-SA unless otherwise noted.