“What a day! It's been really mucky and really grubby. I can't wait to get to the washdown to get spruced up for the party tonight!”
―Emily

Emily Makes a Splash! is a magazine story, illustrated using images from the CGI television series.

Emily is looking forward to the Halloween party at Ulfstead Castle. She has been asked by Sir Robert Norramby to bring the guests to the party as she is such a splendid engine with gleaming brass fittings and green paintwork. The Fat Controller agrees to let her do the job and she decides she must clean and shiny so as not to let the Earl down.

On the day of the party, several engines are sent to the works for repair and Emily is given a lot of dirty and smelly jobs. First, Emily has to help Whiff at the Waste Dump. Then, she has to take some workers to the quarry for Toby where quarry dust swirls all around her. Emily's last job is to take some pigs from the docks to Farmer Trotter's Pig Farm. Emily decides that she must get to the washdown to be spruced up for her special job.

At the washdown, Emily waits patiently for her turn, but there are several engines in front of her. At long last, it is her turn. The workmen put soap on their big brushes and soon Emily is covered in foam. One workman fetches the hose to rinse the bubbles off, but nothing comes out. He tells Emily that the water must have been turned off for some reason. By now, the mud, dust, dirt and soap are all drying and getting caked on Emily's lovely paintwork.

Just then, Thomas rolls up. Tears begin to form in grubby Emily's eyes as she explains that she needs to look her best for her very important job. Thomas has an idea and tells Emily to follow him. Emily is confused, but they are soon outside the Animal Park. Thomas' driver goes into the park and a few minutes later, several grey trunks appear over the wall. Suddenly, Emily is drenched in water which washes away all of the dirt and soap suds. Thomas had made friends with the elephants while taking visitors to the park in the summer holidays; they were more than happy to help their new friend. Emily chuffs away as happy as can be. 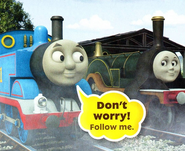 Add a photo to this gallery
Retrieved from "https://ttte.fandom.com/wiki/Emily_Makes_a_Splash!?oldid=1688407"
Community content is available under CC-BY-SA unless otherwise noted.