Thomas the Tank Engine Wikia
Register
Don't have an account?
Sign In
in: Magazine stories, Magazine and Annual adaptations

2004
Engine Trouble is a magazine story, illustrated using photographs from the television series.

The Fat Controller sends Thomas to work at the Cement Works to help Diesel. The Fat Controller tells Thomas to work hard and not let him down. Despite the rivalry between steam and diesel engines, Thomas is determined to work hard and be friendly. When he arrives at the Cement Works, a workman gives Thomas a message. The worker tells Thomas that Diesel says to wait for him under the chute. Thomas has not been waiting for more than a minute when a huge shower of cement and stones rain down on him. Diesel acts annoyed with Thomas, saying that he was expecting Thomas to help him, not create more work.

That night, Thomas tells the other engines that he is sure Diesel left him under the chute on purpose. Thomas says that he no longer wants to work at the Cement Works, but Henry urges Thomas to give it another day as things might get better. Thomas, not wanting to disappoint the Fat Controller, agrees.

The next morning, Thomas arrives at the Cement Works to find Diesel looking unwell and blowing out black smoke. Diesel says that there is something wrong with his fuel, but is sure that a steam engine like Thomas cannot help him. Thomas asks Diesel where the fuel is kept and he will go and get some.

Thomas puffs down to the depot where the diesel fuel is stored. The workmen are surprised to see a steam engine at the depot. Thomas explains Diesel's problem and one of the workmen concludes that some cement dust must have ended up into his fuel tank. The workmen load Thomas' flatbeds with drums of fuel and Thomas puffs carefully back to the Cement Works.

Diesel is delighted to see the drums and Thomas' driver helps to empty Diesel's tank and pour the fresh fuel in. Soon, Diesel is ready for work again and eager to make up for lost time. At the end of the day, Thomas gets ready to go back to the engine sheds. Before Thomas leaves, Diesel thanks Thomas and calls him a really useful engine. Then, Thomas calls Diesel a very hardworking engine in return. 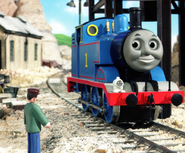 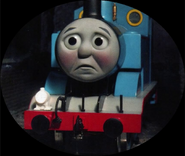